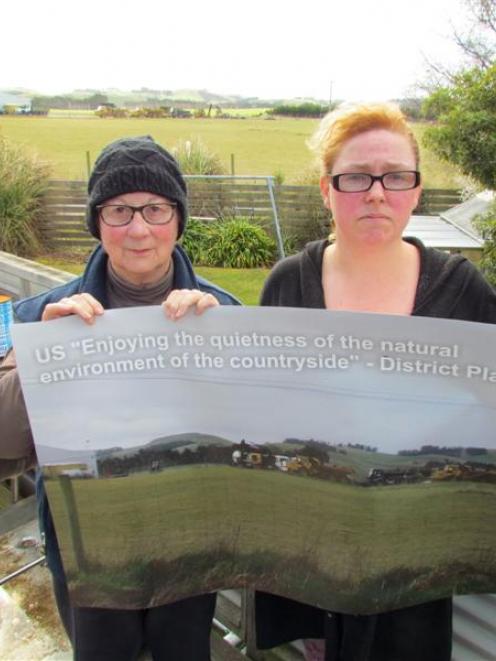 Earlier this year, a large shed was built on a 5ha lot overlooked by properties belonging to Hayley Kennedy and Gen and Keith Heselwood, in Parsons Rd.

They thought it was ''a somewhat large'' farm shed, but then earthmoving and contracting machinery started to appear and it became a contracting yard.

Their inquiries to the Waitaki District Council revealed the yard was operating in the rural general zone without resource consent and its owner was told to apply for one.

The land and shed is owned by Real Southern Ltd and leased to Walton Earthmoving Ltd, both companies owned by Tim Walton and Anita Souness Walton, of Weston, according to the Companies Office.

Mr Walton said the company was ''an existing service industry'', had relocated from another rural site and operated in the area in which it was sited.

''It's no different from a farmer's digger on farm,'' he said.

He would not specifically comment when asked why the site had been developed without resource consent, other than to say the company had operated for nine years at Enfield in the rural general zone and ''not had a worry''.

Last week, the council confirmed the business was established without resource consent.

Ms Kennedy and Mrs Heselwood have lived on their properties for about 20 years, both attracted to and enjoying the surrounding rural environment. They said they never envisaged that would be spoilt by an earthmoving contractor's yard.

''We are two little people who have lived here a long time and we feel we are battling big business.''

Ms Kennedy said she was told the shed had a building consent but the site had no resource consent.

''An abatement notice was issued and they were told to apply for [resource] consent,'' she said.

Mr Walton said he was not aware of any abatement notice, but had been told by the council to apply for resource consent.

Ms Kennedy and the Heselwoods have opposed the consent application and want the yard to cease operating. They believe it breaches the council's district plan, including the provision ''enjoying the quietness of the natural environment of the countryside''.

Among their concerns were heavy machinery on the road, safety, noise, loss of their rural aspect, and devaluation of property.

Mr Walton said they were not staying within the facts.

''Basically, they ..want us somewhere else,'' he said.

''We then confirmed the activity was as complained about and advised the landowner a land use consent was needed to keep operating from that site. The council issued an abatement notice to the Waltons,'' he said.

A hearing will be held on October 8 in the WDC chambers.