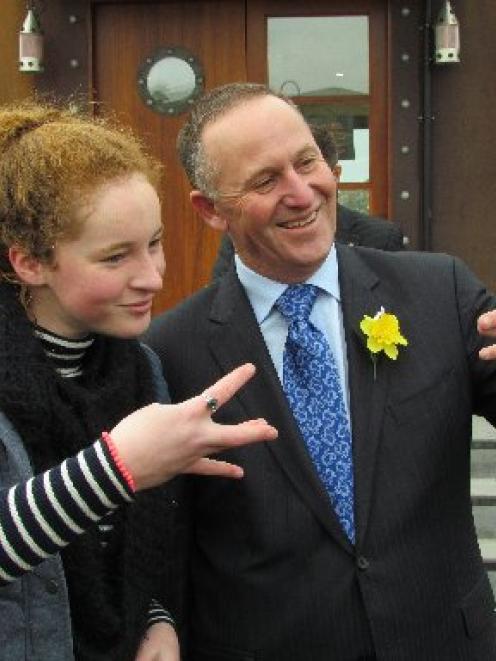 Nadia Kerr (16), of Oamaru, teaches Prime Minister John Key a ''Westside'' gesture. PHOTO: David Bruce
A boom is envisaged for the Alps to Ocean cycle trail after a grant of almost $1million was announced for the project yesterday.

''The floodgates will open'', trail sales and marketing manager Jason Meynard said, after Prime Minister John Key announced in Oamaru a $935,000 grant for the trail.

Mr Key was in the town visiting businesses and to officially open the North Oamaru Business Park.

The grant will complete the 310km cycle trail from Mt Cook to Oamaru Harbour by shifting 37km of the remaining sections using the road to off-road.

That includes sections on State Highway 83 which, because of bends, raises safety issues.

Thousands were already using the trail, but many tended to ride the off-road sections and bypass the road, Mr Meynard said.

''I have lots of comments from people who want to ride the trail when it is finished and all off-road, particularly families with children, so the floodgates will open,'' he said.

However, Mr Gaskill said there would probably be other opportunities to develop the trail in the future.

It was Mr Key's second visit to Oamaru harbour for the Alps 2 Ocean. In May 2010 he opened the first section around the Oamaru Harbour which was also the end of the trail.

Mr Key said the trail, when finished, would be a major tourism asset for the Waitaki and Mackenzie districts, helping attract local and international visitors to the area.

''There is strong support from local tourism operators, and a growing number of international tourists are already using the trail, with an estimated 25% more users in January, compared with the same period last year.''

The additional funding from the National Cycleway Fund brings the Government's total contribution to Alps 2 Ocean to $3,705,000.

Another $955,000 has been raised by the community to contribute to the project.

Mr Key started his Oamaru visit with a tour of Scott's Brewery, founded by Phil and Tyla Scott in 2013, in the former railways goods shed.

Throughout his visit, there was plenty of time for selfies or photographs with Mr Key, including one for 16-year-old St Kevin's College pupil Nadia Kerr.

She taught him the ''Westside'' gesture, forming a W with his fingers, so they could both pose for a photograph which will become her Facebook profile picture.

At Gillies Metaltech, Mr Key was shown around the foundry by representatives of the owner, Hynds Group Ltd, and staff.

That was followed by the official opening of the North Oamaru Business Park and one of the new businesses there, Johnson Gluyas Tractors.