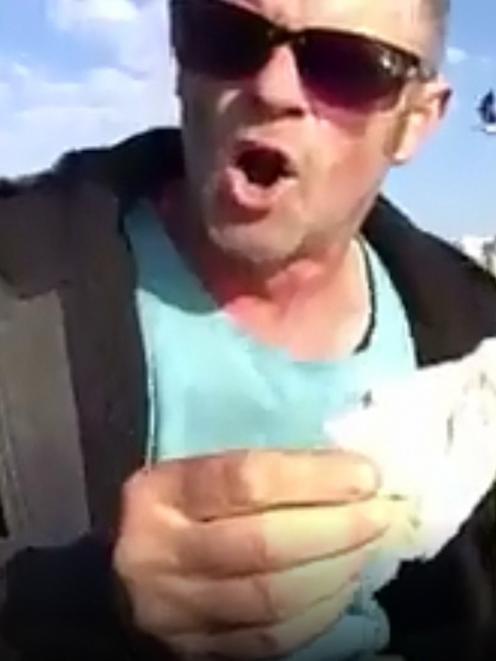 Gary Hughes says a trip to court for defacing a public art work has not made him hate it any less. PHOTO: SUPPLIED
The man who filmed himself chipping a piece from Dunedin's waterfront tooth sculpture has walked away without a conviction.

Gary Hughes (52) was charged with wilful damage after the Dunedin City Council laid a formal complaint with police earlier this year.

Hughes' notoriety rocketed when he posted a video online of himself hacking a chunk from one of the six large Oamaru stone teeth that make up Harbour Mouth Molars.

Within days, the footage had attracted more than 10,000 views and police asked the man to take it down.

When he refused, the charge was laid and Hughes was summonsed to appear before the court.

It did not quite go according to plan.

Thinking he would be appearing before a judge, Hughes prepared a statement clarifying his opposition to the $45,000 sculpture, which he considered a waste of public money.

But the case was only called in front of a registrar where police offered him diversion.

Hughes said he was tempted to shun the process "just for the principle" but eventually a lawyer talked him out of that course of action.

The conditions of diversion were for Hughes to donate $150 of items to the city's foodbank.

And he had to write an apology letter, too.

"I thought about writing it in crayon or cutting out letters from a magazine like a hostage note," Hughes said.

Hughes prepared a statement clarifying his opposition to the $45,000 sculpture, which he considered a waste of public money. Photo: ODT files

Despite having to jump through the prescribed hoops, he said he was as concerned as ever with local body spending.

Hughes refused to rule out further stunts if the mood took him.

As for the chunk of rock he took from artist Regan Gentry's 2010 work, it remained at home.

Hughes said he had received offers of cash for the souvenir but thought he would hang on to it as a reminder of his exploits.

Had being taken to court changed his opinion of the monumental molars?

"I still hate those teeth."