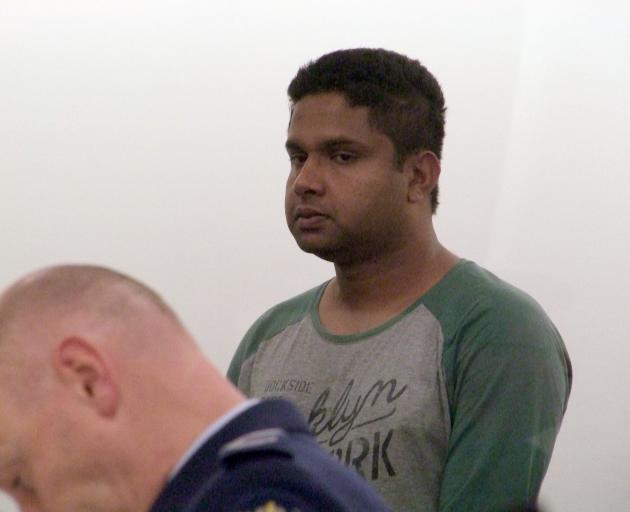 Harshana Thammahetti Mudalige (34) will serve all his 17-month prison term because his latest offending marked his second strike. PHOTO: ROB KIDD
A sex offender is back behind bars after subjecting two of his co-workers to his lewd acts.

Nearly 14 months ago he stood in the dock facing similar charges after following various women around Dunedin and molesting one of them.

He was serving release conditions aimed at stopping such a repeat in December last year when he struck again.

Thammahetti Mudalige was on a bus home to Dunedin from Balclutha, where he worked.

He took an aisle seat next to a teenager who sat beside the window.

On the journey, the defendant began stroking the woman's thigh.

She moved away from him but it did not stop Thammahetti Mudalige's advances.

When the victim continued to ignore him, he tried to engage her in conversation.

The next day, Thammahetti Mudalige was at work when a colleague approached him about the state of his safety equipment.

While she helped him re-fasten his apron, the defendant reached behind him and grabbed at the victim's crotch.

Both women told police they had been shaken by the unprompted advances.

The younger woman said she was "terrified" and continued to be fearful of strangers.

The second victim had also been changed by the experience and said she no longer liked to go out on her own.

Thammahetti Mudalige wrote a letter to the court and Judge Michael Turner was scathing of its contents.

"I did not do this on purpose and this was out of character for me," the defendant wrote.

The judge "utterly rejected" that stance.

Intent was part of the charges Thammahetti Mudalige had admitted and his previous rampage debunked the second half of the statement.

"This offending is part of your character and will remain so until you address your offending-related needs," Judge Turner said.

Thammahetti Mudalige had previously followed a woman to her home in Musselburgh, hidden in her bushes, groped a woman's breast after pursuing her down the street and performed an indecent act outside a parked car at a lookout.

Defence counsel Sarah Saunderson-Warner said her client only offended when he used cannabis.

The December crimes were committed when he was under financial pressure to repay debts and he turned to the drug "for relaxation", she said.

While Thammahetti Mudalige had supportive family in Sri Lanka, he was a permanent resident in New Zealand and planned to stay here after his release from prison.

Thammahetti Mudalige was jailed for 17 months, which he will serve without parole since being given a second strike under the three-strikes regime.