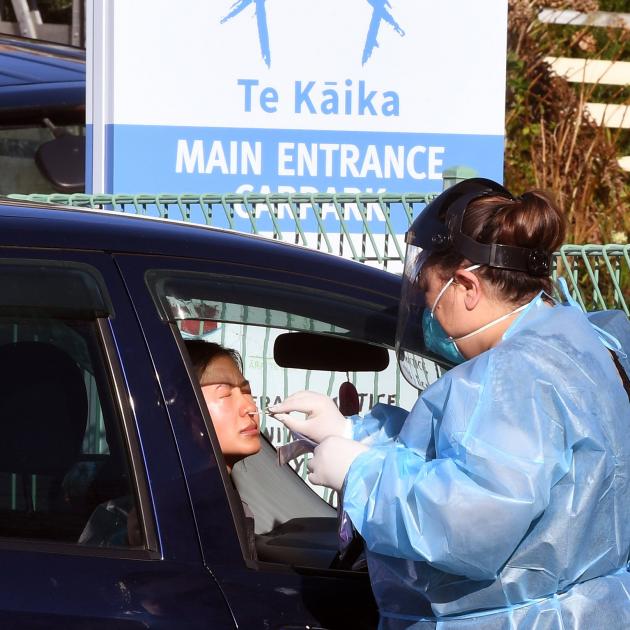 Testing rates in Otago and Southland, like the rest of the country, had dwindled as a result of many months without a case of the virus in the community.

However, the rapid move to Alert Level 4 on Tuesday night following a now-confirmed case of the Delta variant in Auckland reinvigorated demand for tests in the South.

The number of tests performed yesterday has yet to be tallied, but all general practices spoken to reported an increase in test requests.

‘‘We’ve probably done about 200 tests today ... That’s on a par with what we were doing during the previous peak.’’

WellSouth chief executive Andrew Swanson-Dobbs said clinics in both Otago and Southland had been extremely busy all day.

‘‘We are grateful that GP teams have again stepped up quickly to provide Covid-19 testing to communities across the region at such short notice.’’

Calls to WellSouth’s 0800 Virus-19 hotline also increased markedly yesterday, as people suddenly started to pay much more attention to sneezing and coughs which earlier in the week they might have dismissed as a winter sniffle.

Mr Swanson-Dobbs said that while demand had been very steady, it had not yet reached the point where WellSouth needed to reactivate the community-based testing facilities which it put in place during the first wave of Covid-19.

Preliminary numbers showed about 1100 swabs had been taken in the South yesterday and about 240 calls made to the call centre.

Both were a significant increase on a regular day.

‘‘We are prepared to have a community based testing centre for additional swabbing capacity set up and operational within hours should it be needed.’’

Ms Lewis said a wide range of people had flocked to the Te Kaika clinic at Caversham, including people who feared they might be contacts, to people with symptoms, to people with no symptoms at all.

‘‘I’m sitting down with my team now debriefing and planning rosters so we are ready to go again tomorrow.’’

Southern District Health Board medical officer of health Susan Jack said it was important everyone who felt they had Covid-like symptoms was tested, even if they had been fully vaccinated.

‘‘The vaccine does reduce the severity of the illness, but people can still contract the virus and transmit it to others.”

And how many "cycles" are these tests run at?, the cdc recommend no more than (iirc) 20 and that's before the cdc has said these pcr tests are no longer fit for purpose and are to be no longer used from December onwards.