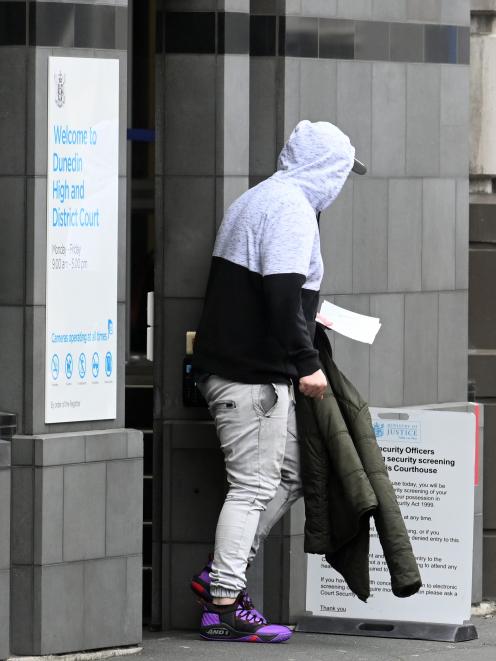 Zane Allison will spend the next three months on a 7pm-7am curfew. PHOTO: LINDA ROBERTSON
The driver who caused a crash which claimed the life of a beloved Mosgiel family man was on a "cocktail of drugs" at the time, a court has heard.

Judge Kevin Phillips stressed to the many family members of the victim present that his options were constrained by the charges, which held a maximum penalty of three months’ imprisonment.

"It does not in any way take away from the losses that each of you suffered and suffer every day," he said.

Prosecutor James Collins explained that more serious charges of driving while impaired were not laid because police did not believe they could prove beyond reasonable doubt that the substances in Allison’s system — cannabis and prescription medication — caused the crash.

Judge Phillips said he did "not necessarily accept that".

Mr Gibson’s wife of more than 40 years Katie read an emotional statement and said she hated Allison for what he had done.

"Lewis was my soulmate, my best friend, my everything and that’s been ripped away from me. I’ll never forgive what this person has done to me and my family, and I’ll never be able to move on with my life," she said.

"A large part of me died on the day you took Lewis from me."

At 7.20am on October 5 last year, Allison was driving on SH1 on his way to work on a farm near Palmerston.

Driving alone, contrary to his learner licence, he headed a line of five vehicles travelling north at just under the 100kmh limit.

A Kenworth truck was travelling in the opposite direction, hauling pre-cast concrete panels weighing 15,300kg, the court heard.

Near Hawksbury, Allison veered over the centre line into its path.

The driver swerved to avoid a collision but to no avail, and the impact damaged the truck’s steering.

While Allison’s Nissan Bluebird came to a rest in the northbound lane of the highway, the out-of-control heavy vehicle careened into the wrong lane, colliding head on with a Mazda driven by Mr Gibson.

Mr Gisbson suffered blunt-force injuries and died at the scene.

Both victims’ vehicles came to rest in a ditch and the truck driver was flown to Dunedin Hospital for surgery.

Court documents said his left ear was partially torn off and he suffered a gash to his head, a black eye, concussion and bruising.

Allison was also taken to hospital for his injuries and told police he had no memory of events that led to the crash.

He admitted smoking cannabis the previous evening "to help him relax and sleep".

A blood test also detected the presence of Tramadol and other prescription medications in Allison’s system.

The fact the defendant mixed the substances was indicative of his carelessness, Judge Phillips said.

"Your conduct on the day in question has caused devastation ... and will be felt by those people forever," he said.

"He was kind, loving and held a huge piece of my heart. Dad was and still is my absolute everything," she said.

"He despised people who didn’t take care on the road."

Allison had a history of dishonesty and was jailed for two and a-half years over a string of car thefts in 2017 but had no driving convictions to his name, noted Judge Phillips.

He ordered the unemployed defendant to pay the victims a "token" sum of $3000 and $1568 to cover blood-analysis fees.