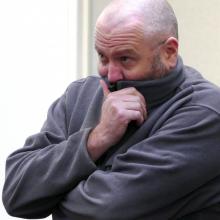 Dwayne Keats got a job at The Salvation Army, despite them knowing he was a sex offender. PHOTO: ROB KIDD
A rapist who got a job volunteering for Christian charity when he struck again will have his sentence appealed by the Solicitor-general.

Dwayne Douglas Keats (47) was sentenced to 15 years’ imprisonment before the High Court at Dunedin last month, with a minimum non-parole period of eight years.

The Crown argued preventive detention should be imposed — an indefinite term behind bars — but Justice Gerald Nation declined that "by a narrow margin".

Keats muttered about an appeal as he was led to the cells but it is the prosecution which has appealed the outcome.

The Court of Appeal confirmed on Thursday that the Solicitor-general had filed the challenge.

No date has been set for the hearing.

Keats was released on parole in 2016, after spending seven years in prison for raping his former partner.

Within months, and despite his history, he got a job as a volunteer van driver at The Salvation Army in Dunedin.

The Parole Board had not imposed any conditions requiring him to have employment signed off by a Probation officer.

Through his employment, he zeroed in on his next victim and abused her repeatedly, before the woman went to police.

The episode has resulted in The Salvation Army launching an independent investigation into how Keats got the job and how much contact he had with the public.

The Otago Daily Times also revealed another convicted sex offender who had spent time behind bars, Jason Wales, had worked in a family store for The Salvation Army in Christchurch for several years before a tip-off from the public alerted the charity to his background.

Keats was found guilty of a slew of sex charges after a judge-alone trial and his victim spoke of how the trauma had shattered her.

"I don't like the world or trust anyone any more. It terrifies me," the victim said at sentencing. "He's taken my smiles away from me."

She said she eventually came forward to tell police of the abuse so she could protect others from a similar fate.

"I believe you are a danger to this community and to all women," the woman told Keats.

The Salvation Army accepted last week that the victim deserved an official apology from the organisation.

But a source close to her said that was yet to happen.

The victim, the source said, was nervous about the prospect of an appeal because there was always a chance Keats’ sentence could be reduced.

The Salvation Army investigation is expected to be completed this month.