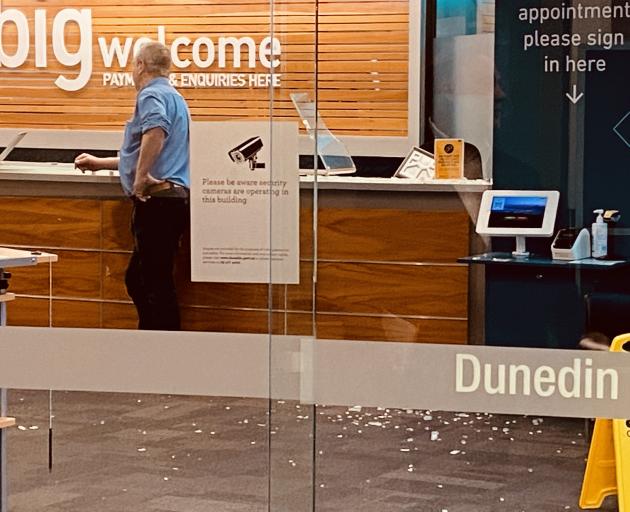 Smashed glass at council's office on Tuesday. Photo: Craig Baxter
A man accused of smashing up the Dunedin City Council's reception area before he was subdued by armed police allegedly threatened to kill a judge and a high-profile lawyer.

The defendant, aged in his 40s, was granted interim name suppression by Judge Michael Turner when he appeared in the Dunedin District Court yesterday, facing three charges of threatening to kill, two of intentional damage and one of possessing a wooden baton in public.

When declined bail, the man immediately erupted, making a derogatory comment about the judge.

He had to be forcibly removed from the court while continuing to yell obscenities.

According to court documents, the defendant caused damage to a central Dunedin legal chambers where he had sought legal advice before unleashing mayhem in the Octagon's Civic Centre.

The defendant was also accused of threatening to kill a teenager, a Dunedin judge and a top-ranking lawyer, charge sheets stated.

Naming those specific parties or the reason the man went on the alleged rampage would likely identify him and therefore breach suppression.

Police said they had been searching for the man in Mosgiel, after being alerted to online threats. Those named were informed, police said.

Officers arrived at the council building about 9.30am, and drew Tasers before detaining the man.

Council chief executive Sandy Graham said the customer services centre was closed on Tuesday following the incident, which resulted in extensive damage to the reception area and the nearby 10-year plan public engagement space.

The council had CCTV footage of the incident and would be working with police, she said.

A security officer was stationed at the customer services entrance yesterday.

The defendant will appear in court again next month.