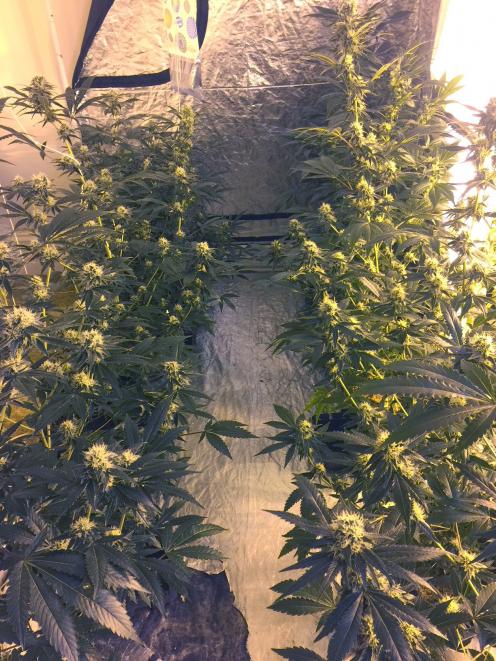 Harley Brown rented a three-bedroom Dunedin flat specifically for his cannabis-growing operation. Photo: Supplied
A Dunedin man who grew nearly $80,000 of cannabis has swapped his prison cell for his mother’s house after a successful appeal.

Harley James Brown (25) was jailed for two years, three months in July after pleading guilty to cultivating cannabis, possession of the class-C drug for supply and possession of equipment used to grow it.

But, before the High Court at Dunedin last month, Justice Rachel Dunningham reduced that sentence to six and a-half months’ home detention, taking into account the five months Brown had spent behind bars.

A Probation report, she said, “paints a clear picture of a man with significant potential to rehabilitate and rebuild a life without criminal drug offending, provided he maintains the course he began on while he was on bail and engages with the assistance that is being made available to him”.

When police raided Brown’s Union St address in June last year, he admitted he had rented the three-bedroom flat specifically to set up the sophisticated drug operation.

He slept in one of the rooms while the other two housed three indoor growing tents, the court heard.

Brown had closed the curtains so lighting was controlled, there were time switches; and water, nutrients and ventilation were all tended to.

When the search warrant was executed, officers found 132 seedlings and 12 mature plants, about a metre tall.

“They had been well cared for and were ready for harvest,” police said.

Officers found dried cannabis packaged and ready for sale, alongside digital scales and many more plastic bags at the ready for harvest.

A police expert originally estimated the haul would have been worth nearly $100,000 but later revised that $80,000.

Crown prosecutor Richard Smith highlighted to the High Court the “premeditation, sophistication and scale of the offending”.

He argued a recent Court of Appeal decision which opened the door for methamphetamine offenders driven by their addiction to have lowered sentences did not apply.

While Justice Dunningham agreed, she pointed to a cultural report on Brown which raised issues that underpinned his descent into crime.

She noted the defendant had done well at school but struggled with tertiary study.

“He appears to be aimless and has not been able to find a sense of purpose or make good decisions,” the judge said.

An unstable family life had contributed to that.

By the time Brown left school he was a frequent user of marijuana and then synthetic cannabis, the report said.

It concluded the man had “a lot of potential but needs guidance and support in place to achieve that”.

Given that background, Justice Dunningham said home detention was the appropriate outcome.

“While acknowledging that personal circumstances tend to be relegated in importance to the need to deter those who are dealing in drugs, they also cannot be ignored,” she said.