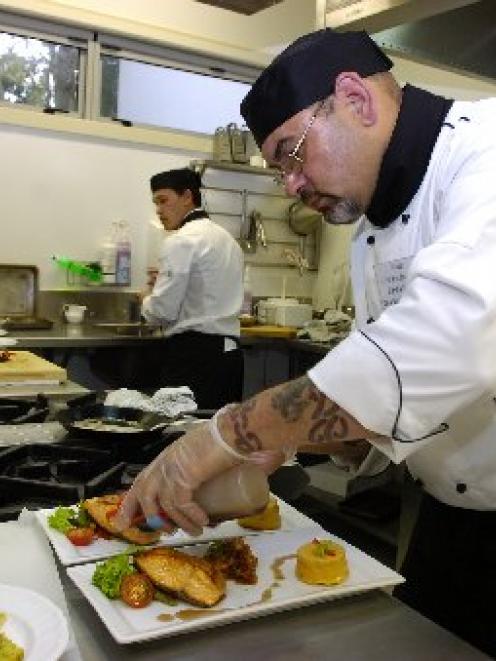 Preparing their winning dishes at the inaugural Residential College Chef of the Year Competition at the Otago Polytechnic Technique Restaurant last night are Cumberland College executive chef Kevin Strange (front) and senior chef Dylan Henry. Photo by Jane Dawber.
Chefs from Dunedin's residential colleges got the chance to air their culinary flair last night as they put aside mass cooking for students to create gourmet dishes instead.

The inaugural Residential College Chef of the Year competition attracted nine teams of ten from the city's student colleges, with Cumberland College taking the top title.

The organiser, college catering manager Gary McNeill, said the chefs produced 10,000 meals a day and the competition was designed to showcase their talent.

Each team was provided with a mystery box of food, which included kangaroo, sweet breads, grapes and camembert cheese, and given one hour to create two dishes.

They received trophies and two knife sets worth $600 each.

They received trophies and two knife sets worth $150.

Mr Heptinstall was pleased with the way the chefs performed under stressful conditions.

"This does show the skills these people have, which probably is not fully appreciated by the students."

Mr McNeill said the competition would be an annual event and he even hoped to make it a national one.