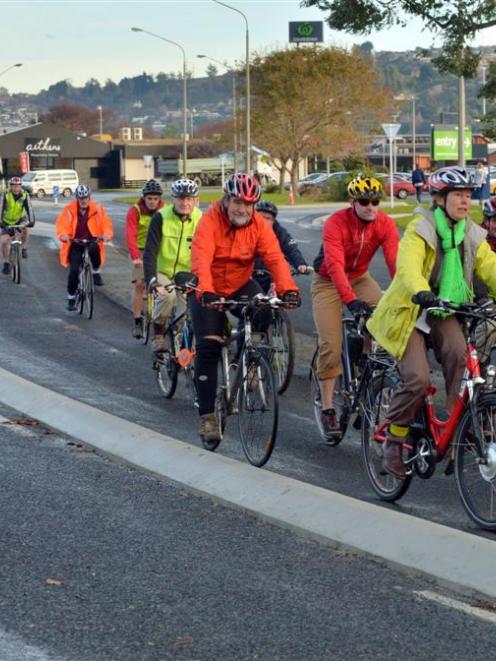 Cyclists use the new cycleway in Portobello Rd between Andersons Bay Rd and Portsmouth Dr. Photo by Gerard O'Brien.
Changes made to accommodate a cycle lane on Portobello Rd continue to generate complaints, but the Dunedin City Council says it will still be weeks before the problem is sorted.

The four-lane section of Portobello Rd, between Andersons Bay Rd and Portsmouth Dr, was reduced to two lanes earlier this year as part of the South Dunedin Cycle Network.

That led to confusion among motorists, some of whom still wanted to drive from Andersons Bay Rd towards the harbour in what is now the wrong lane.

Much of the confusion, council roading projects engineer Evan Matheson said, stemmed from the fact the two lanes that were now a shared footpath/cycle lane still looked like part of the road.

''We thought we'd have a relatively low-cost treatment to the shared path area.

''That assumption was probably incorrect and that area seems to be distracting or confusing people who use that part of of Portobello Rd, so we need to do some changes there.

He admitted he was fielding calls about ''a lot'' of near misses.

''Obviously it's great people are telling us there is still clearly a problem and we need to do some work there, even with the changes we have made lately, including doubling the number of arrows painted on the lanes, there's something there still confusing motorists.''

It sounded like a simple problem, he said, but it had become more complex because of the need to guarantee access for residents' vehicles, rubbish trucks or emergency vehicles across the shared path.

The priority would be to change the shared path area to make it clear it was no longer a road, but how that was best done, for example with landscaping or road resurfacing or other ways, was not known.

Senior traffic engineer Ron Minnema had been charged with finding a solution.

He said a meeting of staff was planned to discuss options, but that would be weeks away at least, because of other commitments.

At the moment, what was there could be described as an interim measure.

''We've got to make the other side not look like a road, so then you feel actually you are in the correct lane on the road.''

There were plenty of ideas about how that could be achieved, but they needed to be worked through into one staged plan.

It would be at least a couple of weeks before he started looking at the shared path.

''It's not unsafe the way it is, so if it sits like that for a few more weeks I don't believe it will an issue.''

After that, the council would revisit the actual road, to ensure it was as clearly marked as possible.

Mr Matheson said the work was part of the first stage of the cycle network, and was slightly over the $1.55 million budget, at $1.6 million, not including the work needed to define the shared path.

Any funding for that part of the work could come from other parts of the total $4.5 million budget for the network.

He said tenders had just closed for the second stage of the project, the construction of which will affect more residences around South Dunedin.

The work is expected to start next month and includes making Bellona St a quiet street, with some changes to exits/entrances to parts of the street.

The company that won the tender would decide the order in which the work would be done, but there was a communications plan, including letter drops, for affected residents, to let them know when work was planned, Mr Matheson said.

Plans were being made earlier for signs and markings to be installed as soon as cycleways were built, to avoid the confusion that had resulted at Portobello Rd, although there were no changes in stage two as radical as those made to Portobello Rd, he said.