Cycle tourist bashed, robbed - and urinated on in Dunedin 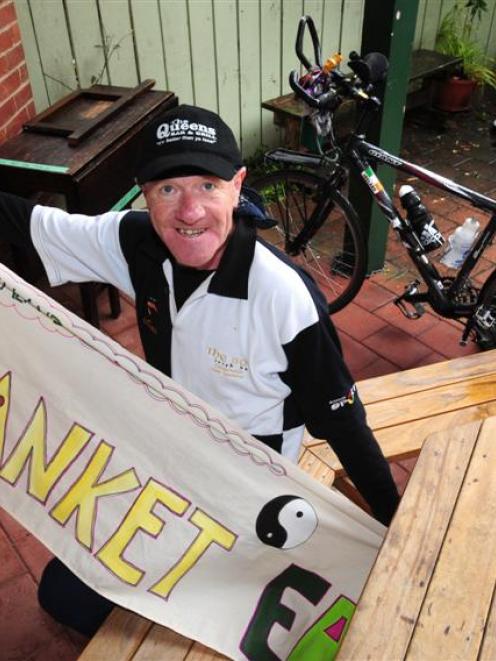 Paul Mack stops off in Dunedin during his Blanket Earth project cycling around the world. File photo by Craig Baxter
Irish cycle tourist Paul Mack wants to come back to New Zealand, despite being robbed and bashed - and urinated on in Dunedin.

Mr Mack, 48, has cycled 1500km through the country since March as part of an eight-year worldwide odyssey to spread the message of love and hope.

He is collecting signatures on blankets to be stitched together and presented to 2012 London Olympic Games organisers, and New Zealand is the sixth of 42 countries on his itinerary.

"This is the nicest country in the world," he told The New Zealand Herald.

"There's just a very small element of people who need to learn manners. The love is paramount. I will definitely be back."

Mr Mack hasn't been put off by having electronic equipment, clothes and travel documents stolen in Thames.

Or having his mobile phone snatched from his pocket while he was playing pool in Tauranga, or the incident in an unnamed town when Mongrel Mob members punched him for wearing blue bandannas.

The gang's boss later apologised to him.

While sleeping at a Dunedin house, he was urinated on by a drunk man.

He has also been in hospital three times to have cysts removed and to be checked out when he began urinating blood.

Mr Mack, who is in Napier today, leaves for Argentina in a fortnight.