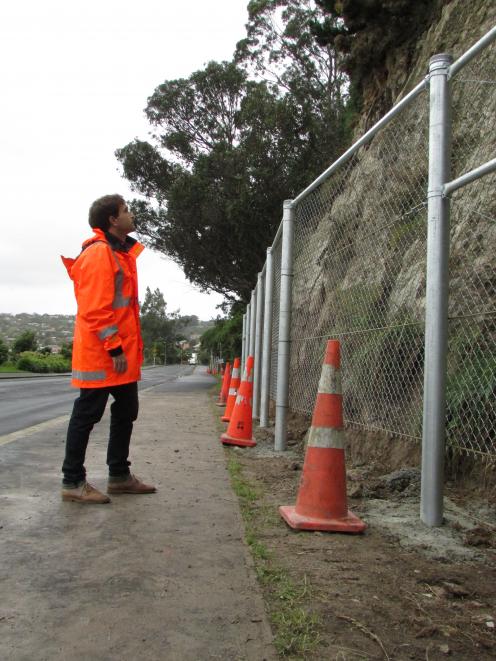 Dunedin City Council senior contract engineer Chris Hasler checks the cliff wall in Shore St, where safety fencing has been installed beside the new cycle-walkway. The almost- completed project is part of Package 1 of the South Dunedin cycleway programme. Photo by Brenda Harwood
Cycle and pedestrian routes through the southern city are opening up and work on Package 1 of the South Dunedin cycleway-walkway is due to be completed at the end of this month.

Work started in November last year on the four connecting sections of the network and, despite the poor summer weather, contractor Fulton Hogan was on track to finish construction of the 3.5km of 3m-wide pathways in the area ''more or less'' on schedule, Dunedin City Council senior contract engineer Chris Hasler said.

''The first part of the network should be open to the public in early May,'' Mr Hasler said.

The $1.7 million project is the first stage of the $4.5 million South Dunedin strategic cycle network.

Among the most visible sections of the new network are the widened cycleway-walkway in Portsmouth Dr, the construction of a shared pathway in Shore St and its linked pathway on the city end of Portobello Rd, as well as a pathway in Royal Cres.

Work has also started in Victoria Rd along to Tahuna School.

''There have been some quite major changes in some of these areas, and things are looking good,'' Mr Hasler said.

In particular, motorists and cyclists using the section of Portobello Rd running between Portsmouth Dr and Andersons Bay Rd would notice major changes. The southern side of this road was now closed to traffic and now carried the cycleway-walkway and the remaining carriageway was now for two-way traffic.

Extensive signage would be installed to highlight the situation for motorists, Mr Hasler said.

In Shore St, the shared pathway was complete and construction of a $45,000 four-section safety fence, being built by Kim Rapley Fencing, was almost finished. The sturdy fence was designed to catch any loose material that might wash down from the cliff.

''Any material that is washed down in the rain will be quite small, so I believe the fence will work very well,'' he said.

Dunedin City Council senior transportation planner Lisa Clifford said the concepts for Package 2 of the South Dunedin strategic cycle network had been handed over for detailed design and would go out for tender in May.