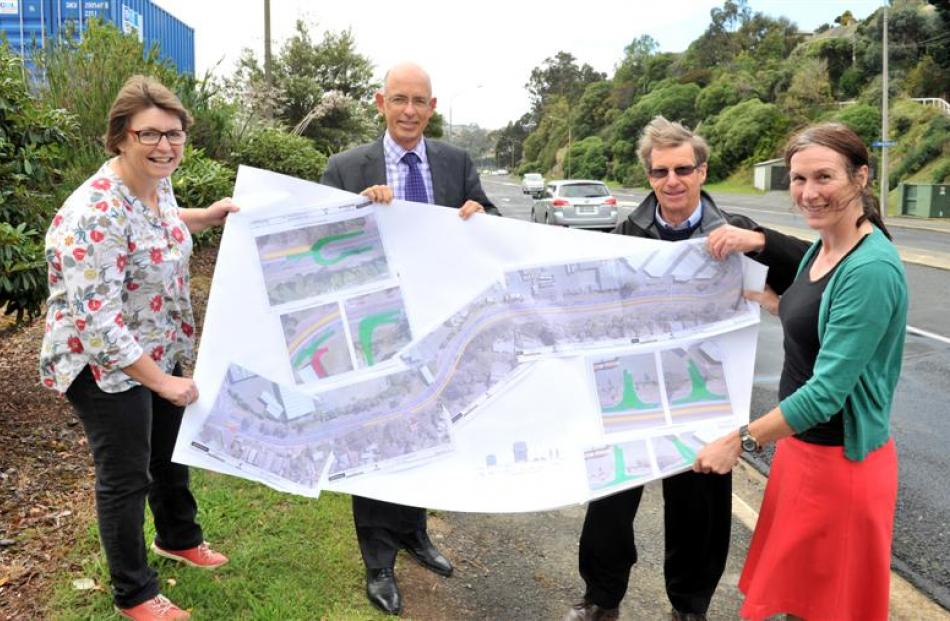 The Dunedin City Council has earned praise from a group of businesses after compromising to resolve a cycleway dispute in Portobello Rd.

But the council has also been urged to learn lessons after initial changes introduced on the road prompted an outcry in the area.

The agreement meant Portobello Rd, between Andersons Bay Rd and Portsmouth Dr, would remain a two-lane road, after the council last year reduced it from four lanes to accommodate a new cycleway.

Last year's change had prompted an outcry from businesses which wanted a second northbound lane reinstated, to provide room for large trucks to turn safely while entering or exiting their sites.

That would include a 2.5m-wide painted median strip between the two vehicle lanes, as used already in Hillside Rd, while a 3m-wide, two-lane cycleway would still feature on the other side of the road.

The revised design would require the removal of a concrete median separating the road and cycleway, to make more room for the painted median strip.

CSL Containers director Philip Chapman told the Otago Daily Times the council had come up with ''a very good solution''.

He had objected again after the council's plan to retain the existing two-lane configuration was signalled last week, fearing it would force large trucks into oncoming traffic to complete their turns.

Yesterday, he said his concerns had been addressed by the extra painted median strip, and congratulated the council and AA Otago staff.

However, he hoped the council would learn from its ''mistake'' and improve its consultation in future.

''I think they realise that, and it will be very good for the rest of their urban cycleway ... It's going to save them a lot of money.''

Cooke Howlison managing director John Marsh said the council had reached a ''pretty good compromise for everyone'' after some ''issues initially''.

''They've listened and have come up with a very workable solution which we're very happy with. I think it will work for all parties.''

The time pressure on councils seeking to secure NZTA funding for cycleways ''makes it very difficult'' to consult properly, but more resources would be invested to do so in future, she said.

The proposed design would be finalised within three weeks, then released for further consultation, including with nearby residents, before construction was completed by the end of the year.

The road's reconfiguration had already cost about $290,000, but in October last year was expected to cost another $325,000 to landscape and complete.

Cr Wilson said that budget was expected to cover the revised plan, including removing the concrete median and completing the project.