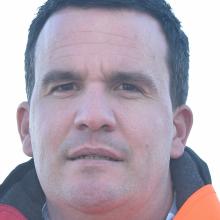 Richard Saunders.
Remedial work to four South Dunedin intersections will mark the end of the controversial process to establish a cycle network in the area.

The South Dunedin cycleway has attracted criticism and generated controversy as a series of mishaps and bungled designs led to drawn-out timeframes and blown budgets.

Work began on the network in November 2013 and was expected to be completed by June 2015 with a budget of $4.5 million.

However, design  problems followed,  leading to some parts being ripped up shortly after being built — in some cases, within days — and complications arose, as did tensions within the community.

What has resulted is a scaled-back plan costing about $6 million.

The work on those two intersections as well as on those at Prince Albert Rd and Bellona and New Sts and Richardson and Moreau Sts is expected to cost about $450,000. Work at the intersection of Market and Tedder Sts —  completed earlier this year —  brings the cost to $540,000.

Dunedin City Council group transport manager Richard Saunders said many lessons had been learned through the process of building the network.

‘‘I think what we have learnt is that as we go through the design process, we need to be far more robust in our thinking and thinking about the needs of all road users,’’ Mr Saunders said.

"What was clear at the end of the South Dunedin network is that the designs they came up with didn’t work as they intended — they didn’t work for all road users.

"So what we need to do in future is ensure we are thinking more broadly. We are looking at best practice around the country and we are applying that thinking to Dunedin.

"We know there were some mistakes made in the South Dunedin network and we need to make sure we don’t repeat those in future cycleway work, or any work," he said.

The final remedial works were expected to come with few disruptions to road users and would be completed in the coming months, he said.

While the project had come with headaches, it did not mean the end of cycleway work in South Dunedin.

"We recognise that the area is still lacking good, safe cycleway connections to areas of South Dunedin and we need to go back and look at where those need to be," Mr Saunders said.

"But that will be done in the context of Dunedin’s wider cycle infrastructure."

It would also include a greater emphasis on engagement with the public.

"Part of getting the public on board in the future is to show we can do this work and do it well, and to be engaged with the public throughout the design process," Mr Saunders said.

"We are aware there is likely to be more access required in the future just to ensure there are good connections and good cycleways between routes people would like to travel. But that will be part of future discussions about future investments in cycleway infrastructure around the city," he said.

There is no such thing as "good, safe cycleway connections" --- it's an urban myth perpetuated by cycleway lobbyists. All the research literature shows quite the opposite --- that the presence of cycleways is associated with a greater number of cycleway deaths and injuries. If cyclists want to be safe, they're better off sticking to the road, where motorists can see them.

"What was clear at the end of the South Dunedin network is that the designs they came up with didn’t work as they intended — they didn’t work for all road users." - Richard Saunders

So, what you're saying Richard, is that you finally worked out what many others had been telling you before you started all this work? That the designs just didn't work for all road users? That the designs catered for cyclists at the expense of others?

As an aside, how many cyclists have been counted using the Portsmouth Drive cycleway? There is a cycle sensor up near the causeway so I'm interested to know how many cyclists actually use that path. I walked the length of it in both directions two weeks ago and encountered only 2 cyclists on both trips combined.