0 Comments
A Dunedin couple's 1300km bicycle journey to lay a coffin on Parliament's steps has been stopped 20 metres short after an emotional exchange with security guards.

Parents Julian and Camilla Cox have this month cycled across the South Island, towing a coffin behind their tandem bike, in a protest calling for government drug-buying agency Pharmac's $1-billion-a-year budget to be doubled.

On Wednesday, they finished the last leg of their three-week trip, ferrying across the Cook Strait to Wellington and carrying the box onto Parliament's lawn with the help of fellow protesters.

The Coxes' 19-year-old daughter Rachael is one of 550 New Zealanders who suffer from the lung disease cystic fibrosis. They say Pharmac's current funding means she and others don't have access to life-prolonging drugs available in other countries.

But as the coffin was carried towards the Parliament building, security guards halted the mock funeral procession of about 30 to tell them they didn't have permission to take the final few steps.

After a tense exchange about what exactly had been cleared by the office of Parliament's Speaker, Trevor Mallard, the campaigners eventually set the box down about 20 metres across the forecourt.

"We have cycled 1300km to make change for our child and all the people we have met on our long journey. To arrive here and have people bickering about 50 metres. How pathetic," she said.

"Our families are dying, are being torn apart and we have small-minded people bickering about 50 metres of public space. You ask how we feel? I am furious and I'm disgusted and I'm disappointed with our politicians." 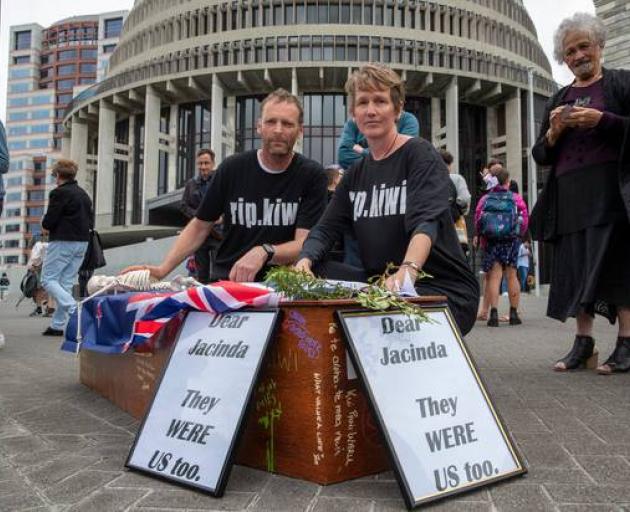 The couple have also used the trip to deliver a letter to Prime Minister Jacinda Ardern pleading for Pharmac to be better funded and reformed to allow for faster decision-making.

"Jacinda, you are our elected leader and you have led the world at showing compassion at times of crises," the letter reads.

"Now we have another crisis that is costing lives on a daily basis; it's called Pharmac and we need you to show both your world-famous empathy and leadership by giving the agency the money it needs."

Children at the front of Wednesday's protest carried signs that read: "Dear Jacinda, they were us too".

They've also been collecting signatures for petition from lobby group Patient Voice Aotearoa calling for Pharmac's $1-billion-a-year budget to be doubled immediately and tripled in two years. It has collected 22,000 signatures and is aiming for 250,000.

The couple say they've been overwhelmed by the support they've received while traveling through South Island settlements, towns and cities.

It was support they've needed as they battled headwinds and unusually cold weather along the way.

"We've been humbled by people's kindness and generosity, with offers of free camping and beds for the night, free coffee and meals, with dozens more sharing personal stories about their own health struggles in having to go without medication," Julian Cox said.

"But it shouldn't be necessary for the parents of a chronically ill child to take this sort of action to make the government sit up and listen.

"For both [Camilla] and me, what we were most looking forward to was getting home and seeing our three daughters," he said. 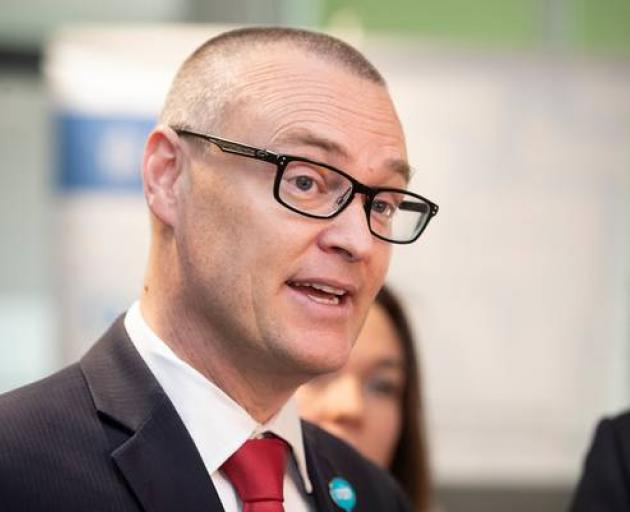 The protests follows a series of high-profile campaigns in recent years that have called for more funding for Pharmac, the agencies processes to be changed or funding for specific drugs.

In a statement, Clark said he acknowledged their determination.

"At this time, Pharmac and its decisions are being scrutinised in great detail by the media, patient advocates and other interested parties. This is as it should be," he said.

In recent months three new cancer medicines have been funded, as well as a new treatment for multiple sclerosis, more meningococcal vaccines and widened access to long-acting reversible contraception.

Comment has been requested from Speaker Trevor Mallard's office.