DCC admits mistake as case back to court 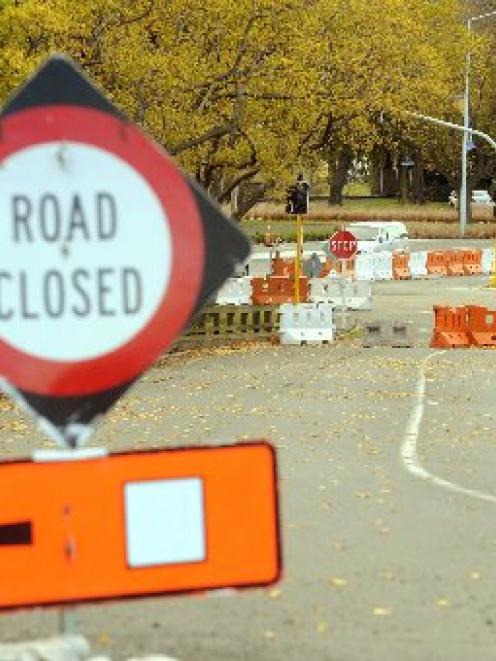 A long-running dispute between the Dunedin City Council and a landowner, which has resulted in road-closed signs and temporary fencing dominating part of Anzac Ave since last year, could be resolved at a High Court hearing next week. Photo by Stephen Jaquiery.
The Dunedin City Council will head back to the High Court next week, after mediation talks with a landowner failed to resolve a dispute linked to the State Highway 88 realignment near Forsyth Barr Stadium.

The dispute has been rumbling away since Anzac Ave businessman Doug Hall obtained a High Court injunction in August last year, upset at the impact the highway realignment was having on access to his nearby property.

The injunction prevented the council commissioning traffic lights at the Frederick St intersection with Anzac Ave and SH88.

"We have tried to get to a mediated, acceptable solution. That's been unsuccessful.

"Parties have not been able to agree, so we're going to the court to try and get a resolution," he said.

However, Mr Avery also confirmed the council had accepted it erred by failing to notify Mr Hall, as an affected party, during the land designation process undertaken prior to the highway realignment's construction.

"We said, when looking at it after a bit of a discussion, we should have involved him. We've said we'll re-do the designation process."

That meant affected parties in the area would be consulted a second time, with submissions and a public hearing to follow, he confirmed.

However, the area of contention remained access to and from Mr Hall's property since the realignment, Mr Avery said.

"Clearly, it's not ideal. We've had some temporary arrangements in place to ensure the safety of motorists.

Council transportation operations manager Graeme Hamilton said work on the new designation had started, including initial talks with about "five or six" landowners around the troublesome intersection.

A decision about whether to opt for limited or full notification of the designation - which would allow anyone to have their say - was expected next month, and would depend on whether any landowners objected to it, he said.

The second designation would not result in the intersection or highway realignment being changed, but would provide the framework for any talks over land purchases that followed, Mr Hamilton said.

However, the second designation meant extra legal, planning and staff costs for the council, although Messrs Hamilton and Avery could not say how much the council had spent to date on the dispute.

Neither could they say when the new traffic lights at the intersection would be commissioned, with Mr Avery saying that depended on the outcome of next week's court hearing.

Mr Hall declined to comment ahead of next week's court hearing.