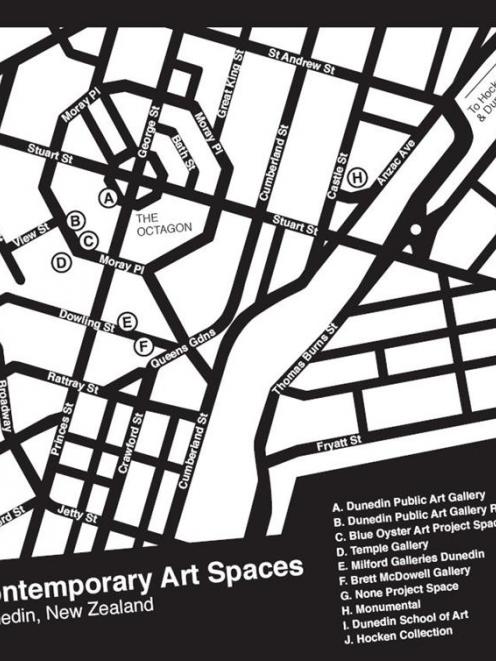 The controversial map, which lists only a selection of Dunedin art galleries. Image supplied.
A Dunedin City Council-funded art map is to be scrapped after causing a furore in the local arts community.

The map, reported in the Otago Daily Times on Monday, has infuriated local artists and gallery-owners for being incomplete and arbitrary.

The map was funded by the DCC to promote interest in contemporary art but fails to mention at least half-a-dozen inner-city galleries, including De Novo, The Artist's Room, Rocda, The Printmaker's Studio, Quadrant and Lagniappe.

"This has to be one of the most incomplete, misleading guides I have seen," Gallery De Novo director Richelle Byers told the ODT.

"Three dealer galleries, including the one that currently employs one of those organising the guide, have been included, yet there is a clear omission of at least another five that are located in the nearby vicinity," she said.

"The fact that there is DCC funding behind this further fuels my anger in that, as a ratepayer, I am partially paying for this half-hearted attempt at an art guide," Mrs Byers asked.

"I think that it should be delayed until all galleries are represented and it gives the user of the guide a true representation of what this city has to offer."

Other gallery owners also contacted the ODT this week with concerns at the map.

When the project was announced on Monday, one of the organisers, Ms Parkinson, said the map would "help develop a sense of community" among Dunedin galleries.

However, when contacted, Ms Parkinson said gallery representation oversights meant the future of the map was now uncertain.

Dunedin City Council community arts adviser Cara Paterson told the ODT the map would not be distributed in its present form.

"It was our intention to underwrite the initial costs associated with developing and distributing a non-commercial project space-type arts map, with a mix of galleries," Ms Paterson said.

"The current mix has definitely created an imbalance and I understand the concern from the other arts businesses who have not been included.

"The maps will not be distributed in their current form."

A meeting had been arranged with affected parties early next week to resolve the issues, she said.