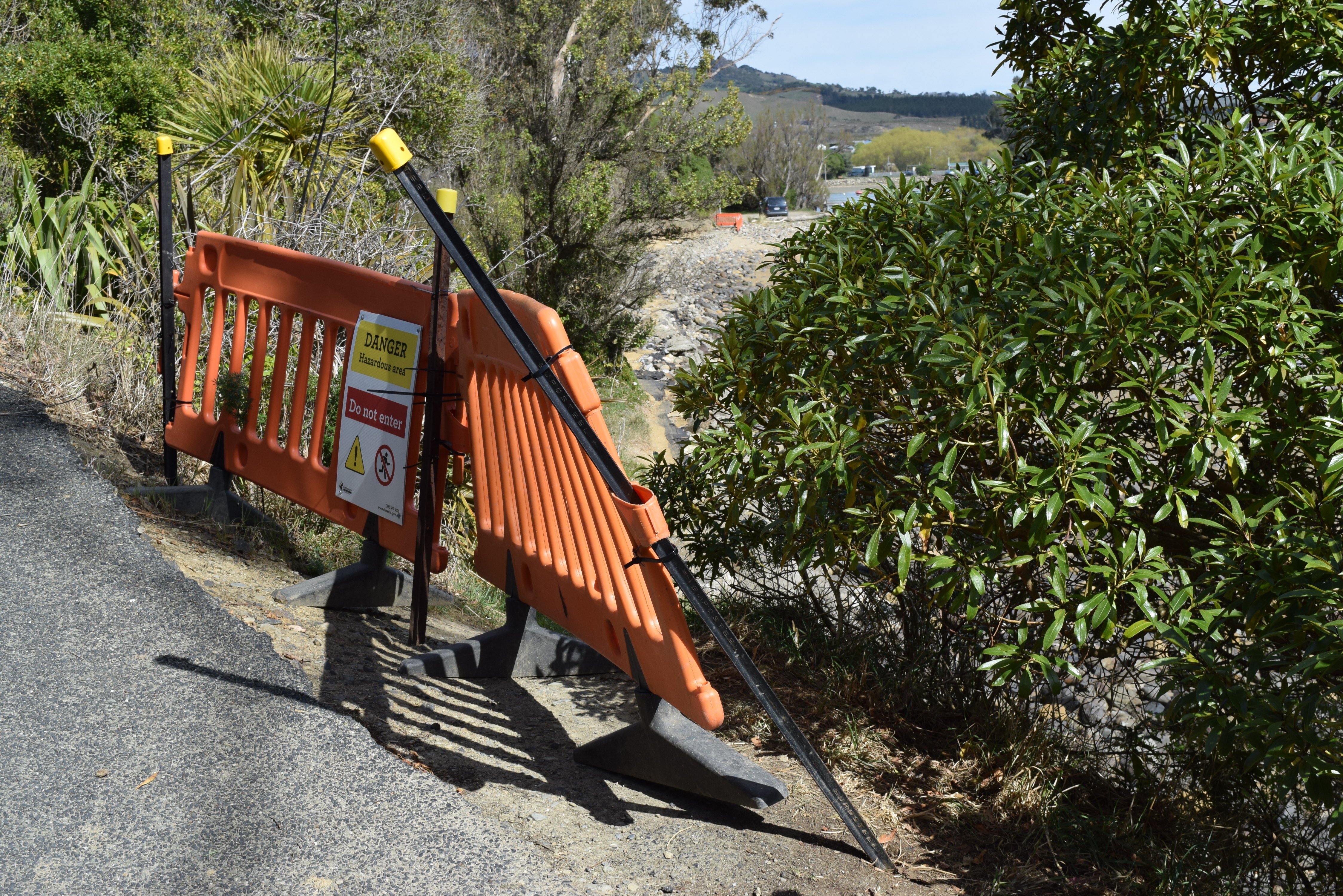 A sign on a barrier warns against using a walkway in Karitane. PHOTOS: SHAWN MCAVINUE
The Dunedin City Council is refusing to fix a collapsing walkway near a historic fortified Maori pa.

Council 3 Waters group manager Tom Dyer, speaking at a Waikouaiti Coast Community Board meeting last week, said the council would not repair a section of collapsing walkway on the Huriawa Peninsula in Karitane.

The peninsula is the site of the pa of Te Wera.

Board chairman Alasdair Morrison said the walkway was popular and used regularly by locals and tourists.

He said as the council owned the sewerage pipe under the section of collapsing walkway then the council should be responsible for fixing it.

Mr Dyer said the walkway was not listed on the council’s asset register therefore it did not have a responsibility to maintain it.

The walkway had been established by the community, Mr Dyer said.

Mr Morrison said the walkway should be on the council register. 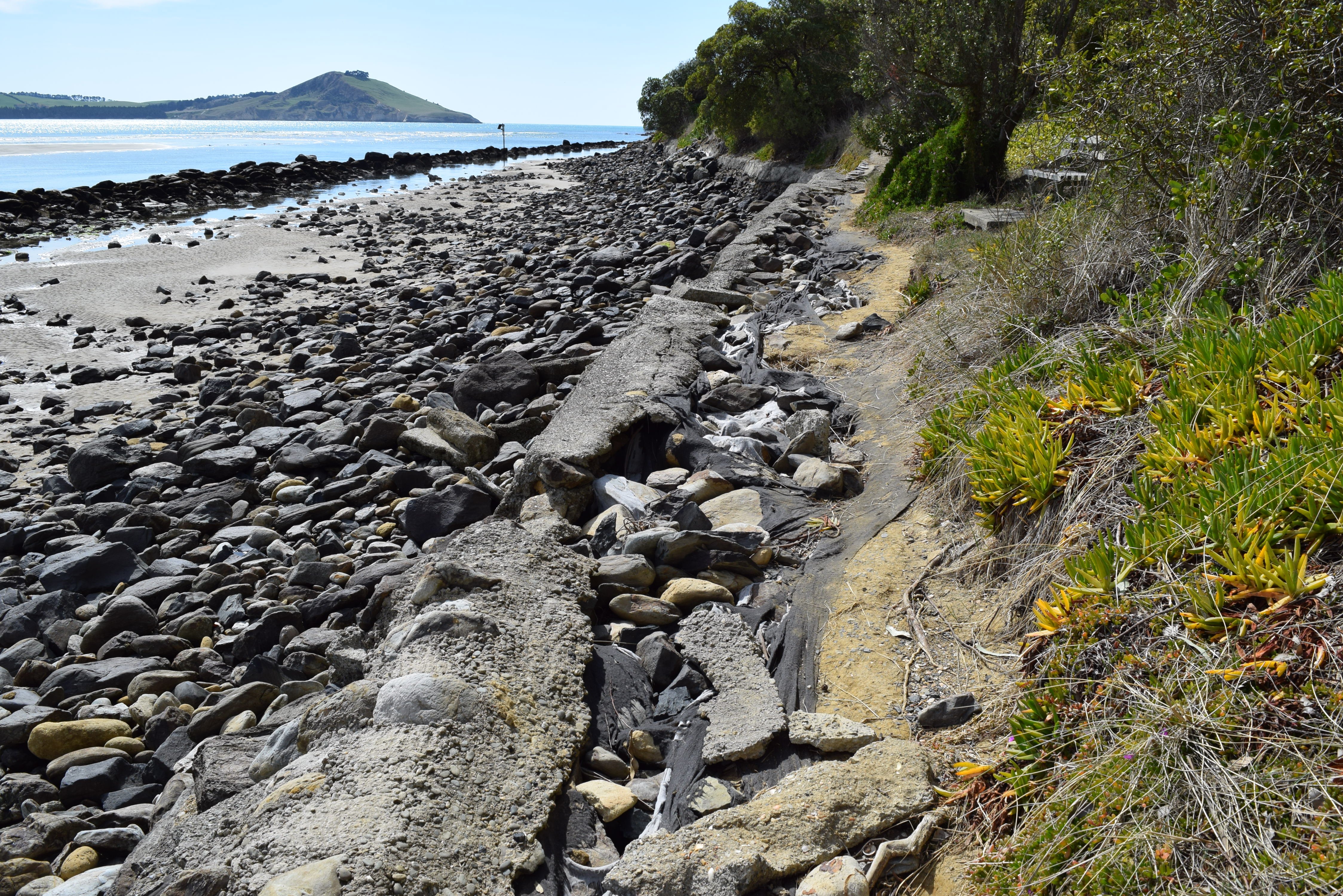 A collapsing walkway in Karitane.
The same section of walkway collapsed about five years ago and no-one wanted to claim ownership of it then, Mr Morrison said.

However, the council arranged "a few truckloads" of gravel and the board arranged for periodic detention workers to do the required labour.

The council needed to decide which of its departments was responsible for the project and take action.

Mr Dyer said the responsibility for the work was not being passed between council departments.

Mr Morrison asked if he had heard the final sentence correctly and repeated it to Mr Dyer.

Mr Dyer said communities across Dunedin often created tracks and then expected the council to maintain them.

"The council’s budget to maintain tracks doesn’t grow every year but the number of tracks does."

Board deputy chairwoman Geraldine Tait said the walkway was located on a historic pa site so it should be on the asset register.

"It’s been in use for hundreds of years."

Mr Morrison asked Mr Dyer to provide the board a quote for the cost to repair the walkway, to reveal the extent of the work required.

Wait a minute now - who does the council work for? And if a community sees it is enhancing to make a walkway in the first place, is this not community in action and that the council should support it?
Ratepayers are asked to support a whole lot of ideas from council that they have not proposed. I just think life should largely be community-led and the council support - not vice versa.

Been there -
Let nature take it's course, the seas erosion of the coast line never stops.
Having walked many times along the previous "track" I can only hope the concerned take the time to clean up all the plastic matting & broken concrete refuse that the sea will discard in it's timely cycle leaving it as a visual reminder of mans follies.
Why not spend more time worrying about the filth from horses training on the beach, the damage being wrought upon the fragile mudflats by bikes & 4x4's.
Take a moment & reflect upon the other environmental damage issues in our area & save money & angst on this "track"

Im sure if it was a cycleway they would fix it, just saying