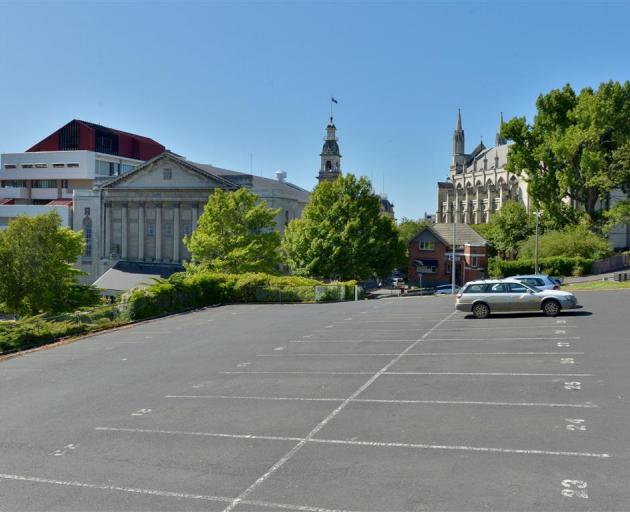 The car park has long been at the centre of discussion as a potential hotel site. Photo: ODT

The four parties have all filed formal expressions of interest following an invitation to the market from the DCC in October.

The deadline to file the expressions of interest was on Friday.

This afternoon, Enterprise Dunedin director John Christie said the interest brought the possible development of a hotel on the site ‘‘a step closer’’.

‘‘A project of this scale is a big undertaking and the amount of work required shows the four parties who have put forward submissions are obviously interested in developing this site.

‘‘This site was identified as a prime location for a hotel development by previous councils.’’

The site had been advertised internationally and developers who have previously been interested in the site were advised and could also take part in the process.

A staff report assessing the registrations of interest would be presented to the full council next year,  and councillors would decide the next steps, he said.

Define 'high quality'?, will it be another towering glass phallic symbol?.
We already have high quality hotels and one that even blocked off a street that we used to be able to drive on.

Well no, clearly it’s going to be in a car park not on the street and no t9 the second also, we already have enough phallic symbols in our vintage stock such as the cenotaph and several church towers! Let’s just hope the DCC don’t #*! This up for a third time.

Why not put any hotel funds into the harbour development? Save our site for us-not developers. An inner-city green park with an underground car park fo town hall users please.