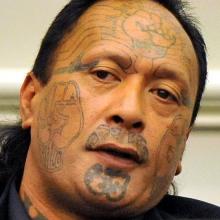 Albert Epere.
The Dunedin City Council is continuing to work with Albert Epere despite the gang leader amassing three more criminal convictions during his initial contract with the city authority.

The council had approved two further contracts with Mr Epere since the first arrangement finished on June 30, and was assessing a third.

The council began a $52,500 contract, involving weed and litter control and path maintenance, in October with Mr Epere, who has an extensive history of criminal offending.

The contract, which expired on June 30, was suspended between December 15, 2015, and February 7 after Mr Epere fell foul of the law.

Mr Epere was convicted, during the contract period, of dangerous driving, relating to an incident on December 13 in which he overtook vehicles without indicating and reached speeds estimated to be more than 150kmh between Oamaru and Dunedin; of allowing a vehicle registered to the Mauri Kohatu Trust, the trust contracted to the council, to transport marijuana, an incident which came to police attention on November 17; and of using insulting language during an exchange with a Work and Income New Zealand employee on June 15.

Council acting group parks and recreation manager Tom Dyer said, despite the convictions, the council was willing to continue working with Mr Epere "given the nature of the charge and the fact it was unrelated to the contract work".

"Generally, the maintenance work standard was satisfactory and no complaints were received about the standard of work," he said.

The Otago Daily Times understands some police officers within Dunedin had reservations about the association between Mr Epere and the council, but  police would not comment officially on the matter.

"This is a matter between the council and Mr Epere and therefore it is not appropriate for police to comment," a police spokeswoman said.

Police confirmed they had not investigated the Mauri Kohatu Trust or how council funds had been used.

During the 2014-15 annual plan hearings, Mr Epere and a representative from the Notorious Mongrel Mob told councillors the two gangs had settled their differences and wanted to change the gangs’ behaviour.

"It’s not about us; it’s about our kids. We have made a path and now we are trying to change it," Mr Epere said, during the hearings.

However, the ODT understands some officers remained uneasy about the arrangement, despite assurances.

Police would not comment on whether officers had met the council in regards to the contract or on Mr Epere’s association with the council.

A council spokeswoman said the council had "checked with as many staff as possible that may have been involved with the contract" and none had met police.

"But we can’t be definitive at this point."

Mr Dyer said the council had approved two more payments for work from Mr Epere — a $1556.10 payment for work associated with contract sites carried out in early July and a $881.25 payment for weed control at Taiaroa Head to be completed soon — and had requested a price for a third piece of unscheduled council work.

The council was still reviewing whether the ongoing contract with Mr Epere would be renewed, he said.