Every day at Delta a ‘storm’ 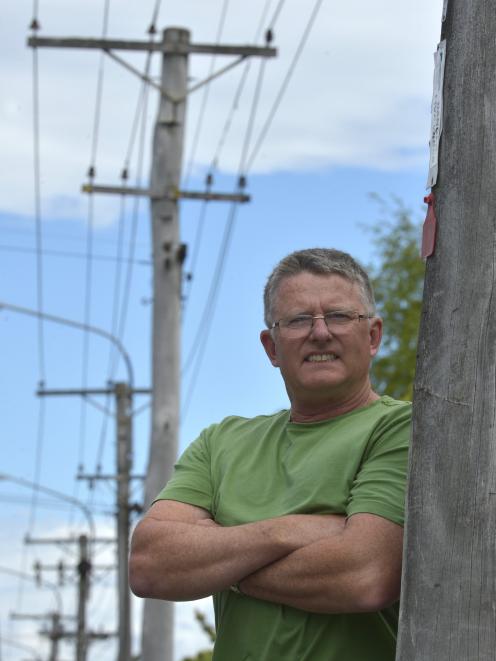 Geoff Lyell beside a red-tagged power pole in North Rd, Northeast Valley. Photo: Gerard O'Brien.
Aurora Energy  is still insisting its  electricity network is safe, despite logging more than 60 "high or extreme risk" public safety incidents — most involving falling power poles — in a year, it has been confirmed.

The revelation came as another former Delta worker came forward to tell the Otago Daily Times it was a struggle on a "daily basis" to keep the lights on in Dunedin.

Geoff Lyell said he was shocked by the state of Aurora’s network when he took a job as system control operator in 2013, after working for Northland network Northpower.

"One of my strengths I was recognised for at Northpower was coming in, in a storm situation, and organising order out of chaos.

"To me, every day that I went to work at Delta was like going to a storm situation — there was stuff breaking all over the place."

He repeatedly raised issues about red-tagged poles, saying in an email he believed Delta and Aurora  were  breaking health and safety laws by leaving so many red-tagged poles standing.

He was largely met with "blank looks" and assured staff were on top of the situation.

"But they clearly weren’t."His comments came as the ODT found 68 public safety incidents had been disclosed in the company’s 10-year asset management plan — a Commerce Commission requirement — earlier this year.

The incidents occurred between April 1 last year and April this year and "not surprisingly failed poles and conductor [power lines] down events account for 80% of total", the document said.

"The primary root cause in the case of conductor down events is vegetation while in the case of poles it can be attributed to  end-of-life factors such as rot," it said.

Delta and Aurora chief executive Grady Cameron has  repeatedly claimed  the network is safe,  after revelations there are nearly 3000 red-tagged poles in its network.

He refused to answer specific questions this week, including about safety and the 68 incidents,  while board chairman Dr Ian Parton  would only insist the priority remained a "safe and reliable network".

That was dismissed by Delta whistleblower Richard Healey, who said the claims and figures could not be reconciled.

"It’s not possible to have that many incidents and still maintain the network is safe."

The "high or extreme risk" classification was  based on the potential for serious injury or death, such as when a power pole or lines fell on to a footpath or road.

It was not necessary for a worker or member of the public to be nearby at the time, and no actual harm to members of the public had been recorded.

But Mr Healey, who had personally entered many of the 68 incidents into Delta’s system, said the potential for injury or death was real.

In  one incident, a pole collapsed on Morven  Ferry Rd, near Queenstown, bringing down 33kV and 11kV lines.

It was "sheer luck" the live wires were caught by the only tree within 400m or they would have been left lying across State Highway 6, he said.

"Our guys had climbed it [the pole] eight days before, and it collapsed on a day when the highest wind gust was 62kmh."

The incidents were "absolutely the tip of the iceberg", as staff were reluctant to attract "unwanted attention" by properly recording incidents, he said.

Mr Healey  said there were about 20 incidents of poles falling over each year, "four or five" of high-voltage lines coming down, and "many more" involving low-voltage wires —  which could still kill.

Mr Lyell said he emailed his superiors after two poles came down early in 2013.But it was not just the poles that were the problem — equipment on  the poles and underground was all "failing", he said.

Mr Lyell resigned after only four months, feeling he was being asked to do too much, and considered blowing the whistle as Mr Healey eventually did.

He had decided to give Delta an opportunity to change its ways but said it was now obvious  it had done nowhere near enough and he wanted to support Mr Healey.

Mr Cameron had inherited an ageing network as chief executive in 2009 but he had "been too long in charge not to have dealt with it".

Mr Lyell joined calls for Mr Cameron and others to take responsibility, saying they were guilty of "hypocrisy".

"A worker who fails an alcohol and drug test is instantly down the road and you think ‘fair enough — he is endangering his workmates and the public’.

"Yet the chief executive and the board, or management, can ...  put the public at risk and end up with a bonus."

There were good staff at Delta but many kept their heads down and asset management staff were victims of the company’s "financial constraint", he said.

That constraint was a result of Delta and Aurora being expected to deliver large profits to the Dunedin City Council, which was "mainlining" on profits.

"They can’t get off this drug."