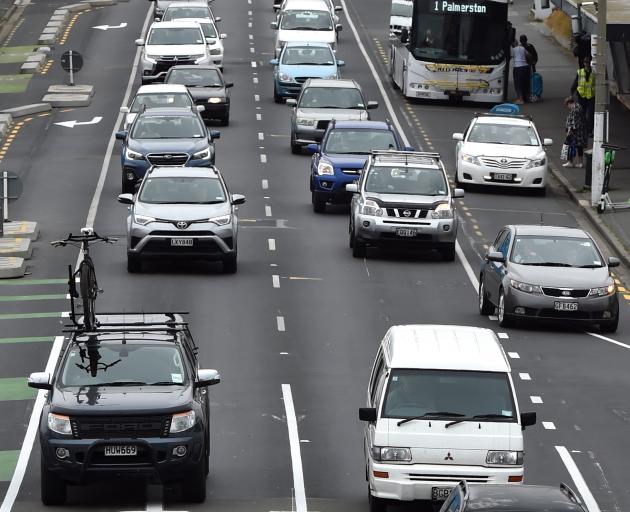 Cars clog both northbound lanes on Cumberland St in Dunedin yesterday afternoon. Inset: A similar pole-mounted sensor used in Hamilton. Photo: Peter McIntosh
Ever get the feeling you are being watched?

By Christmas, it could be the new norm for many motorists in Dunedin. 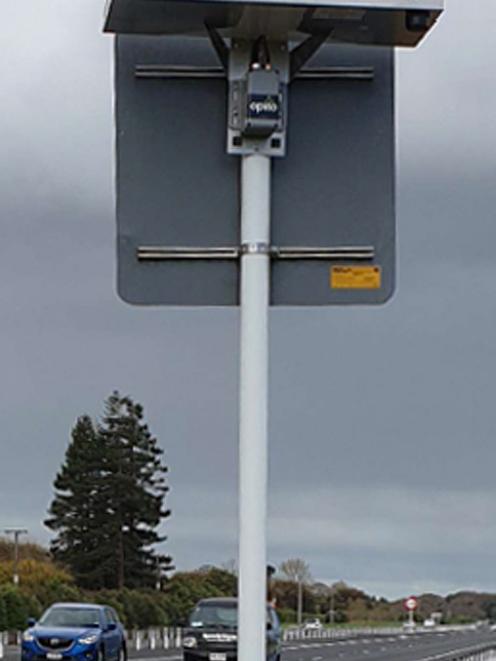 A solar-powered traffic sensor installed in Hamilton. Photo: Supplied
The Dunedin City Council has announced it will spend $150,000 installing a network of 44 pole-mounted sensors around the city to monitor traffic flows using the AddInsight system.

DCC transport engineering and road safety team leader Hjarne Poulsen said the system — developed in Adelaide — worked by detecting Bluetooth in-car devices and tracking them from one location to another.

The information was anonymous and there was no way to identify people or vehicles, but the information would help with transport planning and understanding traffic flow on Dunedin roads, he said.

‘‘The system will also provide origin and destination data to help identify where people are travelling to and from and which routes they use,’’ he said.

The city faced some big construction projects in the years ahead, such as the George St upgrade and Dunedin Hospital rebuild, which were likely to change traffic patterns, he said.

The traffic monitoring system would give the council better ‘‘before’’ data, to help analyse the impact of those projects and adjust the roading network if needed, he said.

Previously, the council’s approach was to drive set routes at different times to record the travel times, he said.

The new network would include solar-powered sensors mounted on roadside poles, which were expected to be installed across the city over the next month and be working by Christmas, he said.

The focus would be on central city streets and arterial routes leading into the city from outer areas such as Mosgiel, Brighton or Port Chalmers, he said.

‘‘The main thing is ... just to get a lot more knowledge of exactly where people are coming from and how they can move about.’’

The initiative was part of wider city traffic management planning.

Automobile Association Otago chairman Malcolm Budd welcomed the initiative, saying he would support anything that monitored traffic flows ‘‘because one of our concerns is the congestion in the city’’.

No way to tell who it is and its private? Yet could track origin and destination?
Yeah, real damn private.
Give me the option to opt out of being illegally tracked thanks, I don't give my consent to this

There are heaps of privacy issues- I have not given the DCC permission to access my Bluetouth data! even if they say it is private. How arrogant and presumptuous! Would the DCC reimburse me if my data is stolen/hacked? and is traced to my car? They already have heaps of camera at intersections. How easy is it to put 1+1 together...

If you think you're being watched by non camera sensors, see your health professional.

Just turn your phone off when travelling if you worry about being 'tracked'. Those with GPS screens in your cars won't be able to escape however, so you're very much a mouse being watched.
All this traffic tracker is doing is monitoring the traffic to gather information about traffic flows. You all gave up your privacy when you bought into the smartphones. You actually 'paid' to hand over your privacy, no point complaining about it now. Tin foil cap anyone?