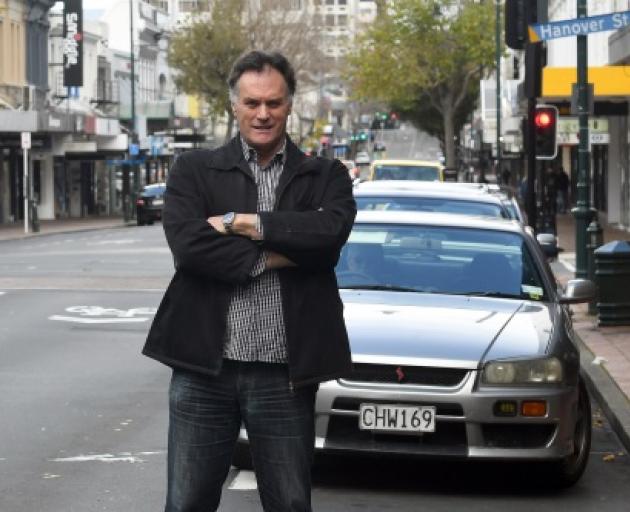 The delay would allow George St property owner Cr Jules Radich to seek legal advice over his participation in the debate.

Counsel for the council Michael Garbutt said the office of the auditor-general had confirmed Cr Radich had a pecuniary interest in relation to George St for deliberations in the annual plan.

He believed it also would preclude Cr Radich from participating in yesterday’s planned debate.

During the public forum, Generation Zero presenters Jenny Coatham and Lydia Le Gros asked for councillors to consider taking advantage of the NZ Transport Agency’s innovating streets for people pilot fund for both the long-term and the temporary project.

The fear that the proposed temporary changes in the proposal were "the first step" towards pedstrianising the street were voiced by AA Otago district council chairman Malcolm Budd yesterday.

Otago Chamber of Commerce chief executive Dougal McGowan asked whether allowing retailers to expand on to footpaths might add to the congestion on footpaths and what other measures to allow for physical distancing had been considered for footpaths.

Council chief executive Sue Bidrose said there were more than 70 speed limit signs ready to put in place from yesterday afternoon, as well as "many, many, many" circles to be painted on the road with the Dunedin logo on them "that would remind people that the road space is ‘cars and cycles and scooters and pedestrians’."

DCC votes 9-6 for a delay in the debate on the latest inner city roading proposal to allow George St property owner Cr Jules Radich to seek legal advice about his participation in the debate.

So, let's get this straight !!!
Legal advice to the council is that Cr Radich should get legal advice as to his possible conflict of interest, before they vote on the motion.
Those that voted for this were : Crs Sophie Barker, Rachel Elder, Doug Hall, Carmen Houlahan, Mike Lord, Jim O’Malley, Jules Radich, Lee Vandervis and Andrew Whiley.

Meanwhile, Everyone that represents the business owners say the motion will destroy already struggling businesses.
And, "Council chief executive Sue Bidrose said there were more than 70 speed limit signs READY to put in place from yesterday". In other words, she had spent the money to have the signs made before the motion is voted on.
This signage would "remind people that the road space is ‘cars and cycles and scooters and pedestrians’."
Maybe there is still a glimmer of hope. Maybe the DCC isn't the Dunedin Undemocratic Non Council of Elitists (DUNCE) yet.
But at least we now know clearly, who the head DUNCE is and his followers.
"Mayor Aaron Hawkins, Crs Christine Garey, Marie Laufiso, Chris Staynes, Steve Walker and David Benson-Pope."

Let’s get this straight indeed! There were TWO Motions and TWO votes. The first was whether to wait 12 hours for the Office of the Auditor General to make a decision whether Cr Radich had a pecuniary interest and, if so, could not take part. You will see Cr Elder abstained from this vote which was lost. So Cr Radich could not take part. The second vote, which was carried, was to go ahead with the TEMPORARY traffic management and public health measures proposed while Level 2 rules persisted. See for yourself : https://youtu.be/DwJhexyFlr8 Planning and Environment Committee Meeting ( reconvened) Friday 15th May. You can also see Cr Vandervis have another ridiculous tantrum over an entirely trivial matter which is why I no longer support him for ANY political office here. Enough is enough!

Good on you to those who stopped this nonsense. Very undemocratic. There is the old saying "dont fix it if it aint broke". There never was anything wrong with it the way it was.

As I mentioned a few days ago it is very difficult to drive at 10 kmh because you HAVE to watch the speedo as it's an unusually speed to keep at, and watch out for pedestrians, and be distracted by the stupid dots, and stay in your lane. Very dangerous situation, not properly anticipated because the mayor doesn't drive!

Remind me, how exactly is the 10km/h thing destroying business (or anything else)? It's escaped me I'm afraid.