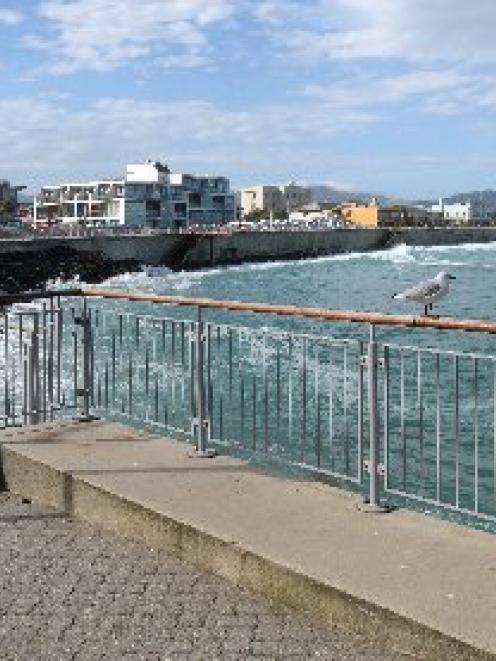 The section of the Esplanade where an access ramp for surfers is expected to be built. PHOTO: LINDA ROBERTSON
A ramp built from tyres and ropes could allow surfers safe access to and from St Clair's waves as early as June.

The proposal was put forward by the St Clair Action Group, formed last year in response to the beach's deteriorating access, and had been positively received by Dunedin City Council representatives, the group's spokesman Dr Richard Egan said.

It would run from near the entrance of the St Clair Hot Saltwater Pool, where Dr Egan said the force of the swells was generally not as severe as the rest of the Esplanade. At the other end, it would be fixed to the seabed.

In between, marine-grade rope and a mass of tyres would form a ramp between 15m-20m wide, creating a blanket effect, allowing surfers to scramble on to the structure and make their way safely out of the surf.

The group had met Dunedin Mayor Dave Cull, Cr Jinty MacTavish and staff from both the city and regional councils, including DCC's parks, recreation and aquatics group manager Richard Saunders.

While discussions and designs had only just begun, it was likely the tyre ramp would be relatively quick and cheap to construct and install.

‘‘That's the whole point. It's not going to be a huge infrastructure cost.''

As plans moved forward, the group would consult local business owners and residents before reporting back to the council with the result of that consultation, he said.

Mr Saunders said the council was taking the group's proposal seriously, but needed to ensure any ramp was ‘‘feasible'' to construct and did not ‘‘pose any risk to users''.

‘‘We understand their concerns. It's not easy to access [the beach] in those mid and high tides.''

However, discussions were in the ‘‘very early stages'' and no details of cost or timing were known yet, Mr Saunders said.

While he could rule out the ramp being installed within the next month, there was a chance it could be in place before the end of June, he said.

How the ramp would be funded would not be discussed until a design was available ‘‘and we can see what the cost might be'', he said.