Views on direction a dividing line 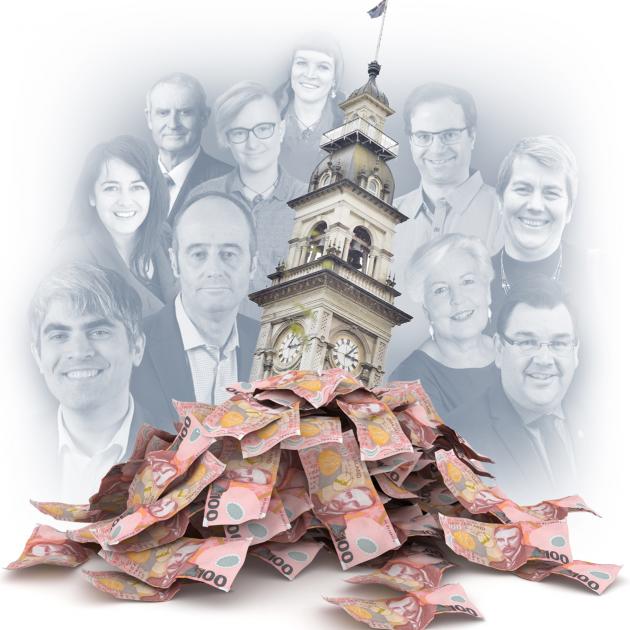 Big increases in Dunedin City Council rates and debt levels are either the costs of a growing city or an unnecessary extravagance, Dunedin's mayoral candidates say.

But the dividing line between the two camps seems to fall between incumbent councillors, who largely defend the city's current trajectory, and those seeking to replace them, many of whom argue cuts are needed.

The council is forecasting this year's 5.3% rates increase will be followed by others totalling 34% by 2028.

Core debt is also climbing after the council lifted its limit from $285million to $350million, while group debt - including that of council-owned companies - is forecast to increase from $658million to $926.5million by 2022.

The drivers of debt include the rebuild of Aurora's network and the increasing of council capital spending, including on flood alleviation and other major infrastructure projects.

Crs Jim O'Malley, Christine Garey, Aaron Hawkins, Rachel Elder and Andrew Whiley - who are all vying to be mayor - said they were largely comfortable with the council's spending plans.

Cr O'Malley said debt was driven largely by the need to invest in growth and the infrastructure to cater for it, and it was "not appropriate" to set arbitrary limits.

"Nobody likes debt, but I also think you've got to have a clear discussion as to why you're generating the debt."

Dunedin's figures remained low compared with other major centres, and it was "scaremongering" to conflate council debt with that of the wider group - secured against the companies - when those companies were not at risk of failing.

"People say you should run your city like you run your house. Well, most people carry pretty big mortgages because they know that if they tried to buy their house in cash in real time, they'd never be able to get one."

Cr Hawkins said he was also "reasonably comfortable" with the council's financial position.

While rates increases were "disproportionately difficult" for those on the lowest incomes, council spending included initiatives to help those most in need, he said.

"Those aren't decisions you make lightly. But, perversely, when you talk about cutting council services in order to reduce the costs of your rates bill, it's those very same people who are disproportionately affected by the reduction of services that you offer your community."

He also found it "ironic" past criticism of deferred maintenance was now being followed by criticism of the spending designed to address that problem.

Cr Garey said the council often dealt in "eye-watering" sums of money, but was expected to do so and use debt to finance necessary expenditure.

The council's spending plans reflected community wishes, expressed through public consultation, and had been signed off by Audit New Zealand, she said.

The city faced big financial challenges ahead, including from climate change, and needed to work with Local Government New Zealand to lobby central government for new funding mechanisms, she said.

Continuing to increase rates year on year was not the answer, she said.

"We can't keep doing that. The funding model has to change."

Cr Elder also said city finances were in "a good place", but council spending needed to be "aspirational" as well as focused on core infrastructure.

The ability of the council to sell one of its companies and repay debt - if needed - should inspire confidence, she said.

Cr Whiley said the need to "catch up" on fixing neglected infrastructure spending was pushing up debt, but debt levels were manageable and the city had a lot to show for its efforts.

Despite that, he opposed the planned $60million central city upgrade, when a smaller $35million spend could reinstate an attractive surface environment, and wanted to cap rates increases at 3%.

Cr Lee Vandervis - who wants to focus on core infrastructure and defer other non-essential projects - did not respond to a request for comment.

Mayoral candidates from outside the council leaned more towards spending restraint.

They included Carmen Houlahan, Malcolm Moncrief-Spittle, Bob Barlin and Mandy Mayhem-Bullock, who are all arguing for a greater focus on core infrastructure before other projects.

Jules Radich said he was comfortable with rates increases, but not increased debt, which he wanted to review.

Scout Barbour-Evans said increases in rates and debt were long overdue, and spending should not be cut at the expense of "basic infrastructure like transport or wastewater management".

The DCC is bloated. Running heaps of non-core services/assets that special interest groups have hoodwinked the DCC to provide. I trust & hope the new mayor will make the tough and right decisions to cut non-core items out and REDUCE our rates.

Rates are going to go up no matter who gets in.

I'm curious - what are all the non-core items that should be cut?

Assuming you are talking about Vandervis.
That will be anything he decides to be nonessential and if you say anything against this you will be painted as a fake news spreader.

I was asking OtagoIdeas what they meant. There's a lot of rhetoric about sticking to core work but no one seems to understand what that is or what the flow on effects of cutting the 'non-core' stuff will be for the people who are least able to afford or adapt to them.

The most frightening word in all that was "aspirational", using that word in regards to spending sends shivers down my spine.

"34% by 2028." is incorrect, annual increases has to be multiplied not added up, and it will be above 50% increase overall. Feel the difference.
Comparing city debt to a family house mortgage is cynical when you are not the one who will foot the bill.

Beware representatives whom are unaware of the perfidy of debt. The art of Goya describes best those whom love promising windmills: