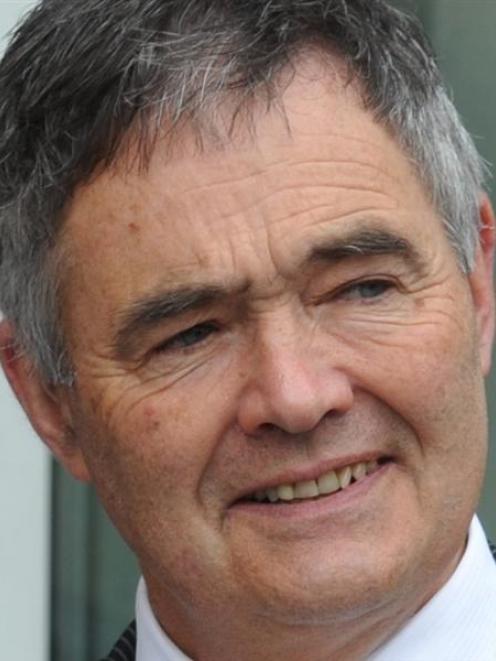 Dave Cull.
Dunedin city councillors burst into applause as it was confirmed yesterday international credit agency Standard and Poor's had lifted its negative outlook for the Dunedin City Council.

''I think what this does is vindicate the last council's resolution and determination and the effectiveness of what we set out to do,'' he told the Otago Daily Times.

His comments came after S&P, in a statement yesterday, announced it had lifted its rating outlook for the council - as well as subsidiary company Dunedin City Treasury Ltd - from negative to stable.

Both entities retained their ''AA'' long-term, and ''A-1+'' short-term, credit ratings.

The news was hand-delivered to Mr Cull part-way through yesterday's full council meeting by a smiling council chief executive Dr Sue Bidrose, prompting Mr Cull to interrupt the meeting to make the announcement.

S&P credit analyst Anthony Walker said in the statement the decision reflected the council's ''significantly'' improved budget performance and liquidity over the past year.

''We expect these improvements to be sustained, allowing Dunedin to reduce its debt burden,'' he said.

Mr Cull, speaking after the meeting, told the ODT the change was a ''testament'' to the good work of the previous council and council staff under former chief executive Paul Orders.

''I think he [Mr Orders] can take a fair bit of credit, but he was working under the direction of the last council, who not only reformed DCHL governance, but set quite tough targets for rates rises, debt containment and acceleration [of repayments].''

It was also a vote of confidence in the new council and its new chief executive, as S&P staff - who visited the city late last month - had to be convinced the turnaround could be sustained, he said.

''I think that they have expressed confidence that this council is resolute and on target.''

He expected the change would result in savings for the council when it came to rolling over existing loans.

''If you're upgraded, you're a better risk for people lending you money, so it must be an advantage.

''We're not looking for new debt now, but we do have to roll over existing debt from time to time, and as we come off one interest rate, the new interest rate you achieve will be determined by the risk that you present.''

The change came just over a year after the agency shifted the council to a negative outlook, saying there was a one-in-three chance of a credit downgrade within the next two years.

That was based on S&P's view Dunedin might not achieve its financial targets, outlined in its long-term plan, and had ''limited room to manoeuvre'' within budgets.

The work had resulted in ''substantial turnaround'' for the council this year, and the likelihood of ''significant adverse findings'' from the Auditor-general's inquiry into land purchases by Delta was also considered low, S&P said.

However, the council's strengths were still partially offset by its high debt ''relative to international peers'', moderate budget flexibility and S&P's ''neutral view'' of the city's economy, it said.

The rating could also be lowered again with any future change in policy direction, operating or capital expenditure, or if debt levels approached 180% of operating revenues, S&P warned.

A copy of S&P's full report is expected to be released in about a week.