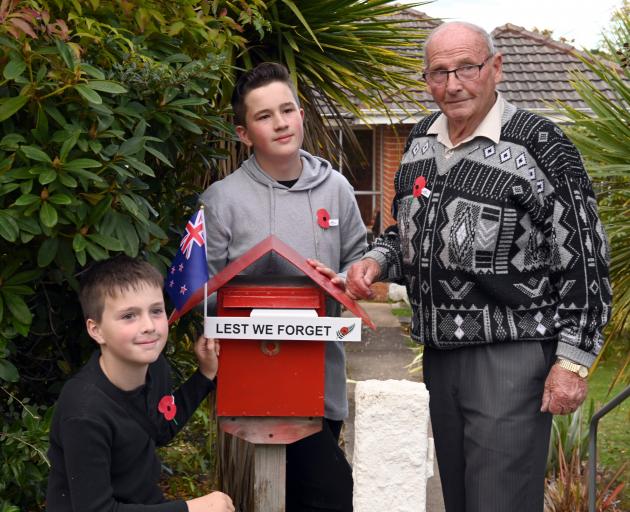 Showing off their Anzac letterbox decorations are brothers Devon and Dartanyon Richards with their great-grandfather Charlie Boyes. PHOTO: LINDA ROBERTSON
After being locked down for Anzac Day last year, a Dunedin man has worked with his great-grandsons to make sure their neighbourhood could pay their respects this year.

Wakari-based Charlie Boyes (80) said he and his two great-grandsons had made more than 50 Anzac letterbox decorations, which had been sold around the neighbourhood.

Dartanyon Richards (14) said he was proud of what they had created.

The project started last year as part of the Stand At Dawn campaign during the Covid-19 lockdown, which encouraged people to stand at their letterbox at 6am on Anzac Day as a mark of respect because mass gatherings were prohibited during Alert Level 4 restrictions.

The boys were upset they could not mark the day at the dawn service, so their great-grandfather helped them to make an Anzac decoration for their letterbox.

It was a hit with the neighbours and this year they decided to offer them for sale.

The decorations are made from plastic board and have string attached so they can be secured to a letterbox.

The boys offered the decorations at material cost, with or without a flag, Dartanyon said.

Mr Boyes said Anzac Day was important for the family as his great-great-uncle Andrew Colquhoun served as a second lieutenant in World War1.

Devon Richards (10) said they had an efficient production line going, and it would take them about 90 minutes to make 15.

He felt Anzac Day was a very important day, and he hoped to continue making the decorations next year.

Production of the decorations would slow as the boys went away for school holidays, but Mr Boyes hoped they would be able to make a few more before Anzac Day.