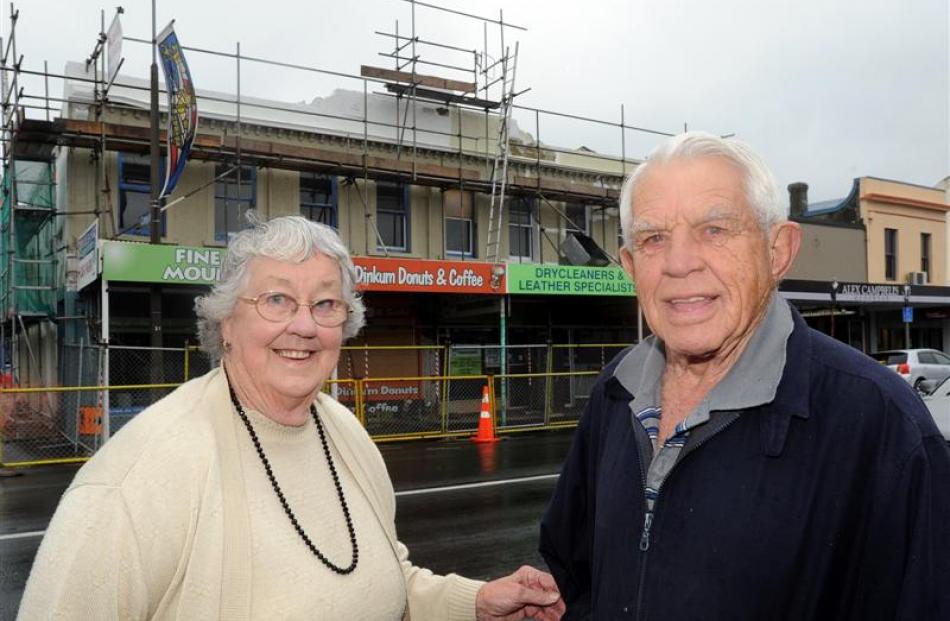 Norma and Cyril Brocklebank outside their South Dunedin building. Photo by Craig Baxter.

The owners of the condemned Brocklebank Drycleaners building in the main street of South Dunedin are frustrated at a five-month wait, so far, for approval to knock down the building.

In August, the Dunedin City Council demanded the building be emptied of its tenants and fenced off, because the facade was unsafe.

The owners, the Brocklebank family trust, complied immediately, and spokeswoman Norma Brocklebank told the Otago Daily Times this week the trust had done everything required of it by the council and the Historic Places Trust. Yet, five months later, the building is still standing.

"The way they [council engineers] spoke it had to come down straight away.

"We're in January now and nothing's been done."

She described dealing with the bureaucracy surrounding the demolition as "a nightmare" and she estimated keeping the barriers in place, and the delay in removing scaffolding from the building, had cost the trust $20,000.

One of the costs had been $1600 for an archaeological examination of the building, the results of which she had yet to see.

The trust had agreed from the outset any new building would be in the same style as the old one.

"We want to get on to this straight away.

"I thought we'd be half built by Christmas.

"We've got somebody waiting to go into that shop ... we've done everything we can."

Mrs Brocklebank's son, Roger, is still able to operate the drycleaning business in the building at the rear of the site.

DCC chief building control officer Neil McLeod told the ODT a building consent allowing demolition was issued last year, soon after it was applied for, however a resource consent was also required.

Resource consents are dealt with by the council's planning department.