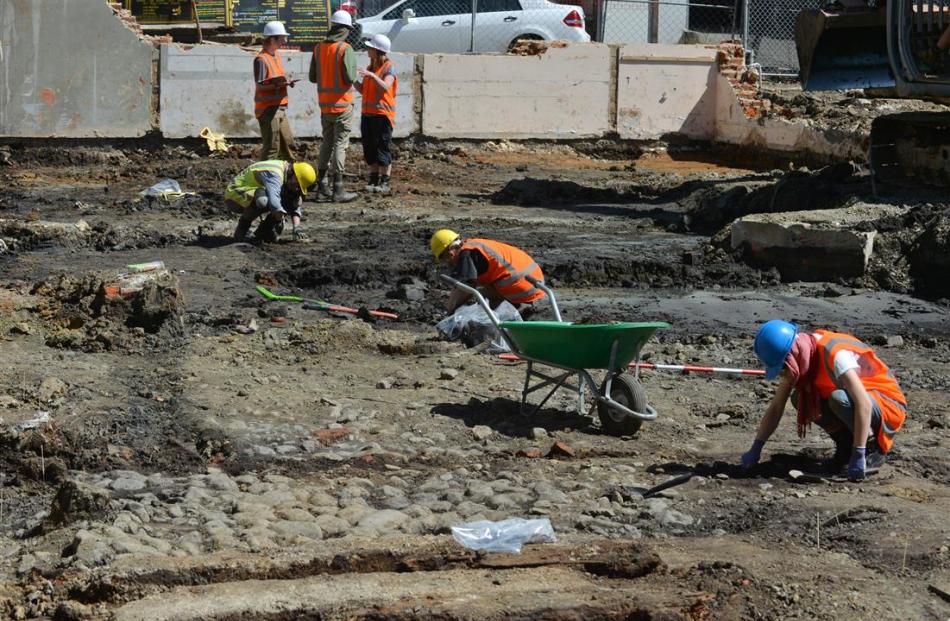 An archaeological team works on the Barningham Building site at the rear of the University of Otago Dental School yesterday. Photo: Gerard O'Brien.

Remnants of Dunedin life in the 1860s are being uncovered by heavy machinery and archaeologists this week following the demolition of the Barningham Building at the University of Otago Dental School.

The building, near the dental school car park, has been demolished to make way for a $126million redevelopment project.

Site archaeology project manager and University of Otago anthropology and archaeology department head Prof Richard Walter said investigations so far had revealed old bottles, clay smoking pipes, bits of old metal and timber framing and a cobblestone floor, which was believed to have been the site of an 1860s workshop.

He said there was a foundry and a series of workshops and out-buildings associated with the shops on George St at the site.

Anything found was being recorded and taken off-site for preservation.

The work was expected to be completed today, he said.

Heritage New Zealand Otago Southland regional archaeologist Dr Matthew Schmidt said an archaeological investigation of the site was a legal requirement which was standard for developments which modified or destroyed sites.

He said businesses and domestic dwellings were on the site in the 19th century.

"It was quite swampy and wet when people first lived here, so a challenging environment for settlers.

"The archaeology should tell us about the sequence of occupation of the site, and what activities were being undertaken.

"Little archaeology has been undertaken in this part of town so the results will be important in understanding the settlement of Dunedin.''