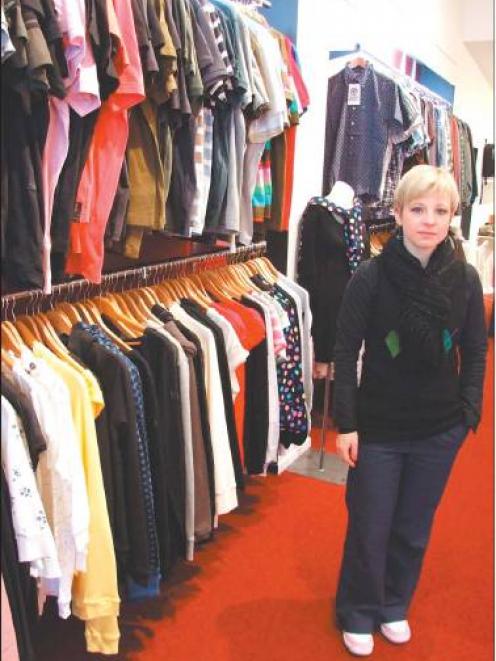 Expansion: Manager Tara James is pictured at Culture, on George St, the recently-opened sister store to Identity.
For self-confessed obsessive sneaker collector Kevin Downie, retailing high-end retro sneakers to Dunedin punters through his Identity store has been an extension of his hobby.


A former designer for Converse and Diesel footwear, Mr Downie has a personal collection of 450 pairs of sneakers and an abiding love of the fashion footwear. He sources sneakers from Japan, the United States and Europe, and is one of only a handful of retailers able to stock the popular designer shoes.

‘‘In the heyday of sneakers, in the 1980s and '90s, lots of kids yearned after these shoes, but couldn't afford them,'' Mr Downie said.

‘‘Now, as adults, they can and they are taking the opportunity to collect them.''

Two years after opening Identity, on George St, to sell sneakers and retro sportswear, Mr Downie has moved on to the ‘‘next progression'' by opening sister store Culture three weeks ago.

Where Identity is focused on the younger, ultra-casual market, Culture is aimed at 16 to 35-year-olds who have matured past the skate and surf look of their teens. The range at Culture includes top quality denim, streetwear, and the very best of the designer sneakers.

‘‘The success of Identity proved there is a market for this kind of gear in Dunedin, and Culture takes it to a new level.''

The opening of a second store is also a tribute to Mr Downie's determination to continue with his innovative business ideas, despite having to cope with the longterm effects of a serious head injury, suffered during an unprovoked attack by a group of young people in 2006. The attack shocked Dunedin.

He is appreciative of all the support and caring words he has had from people during the past two years and is determined to keep moving forward.

Able to work only limited hours, Mr Downie has nevertheless continued to develop his knowledge of the fashion industry and to bring new products to the city.

‘‘I'm looking towards what is happening in Melbourne, Sydney, Auckland and Wellington for developing a sophisticated feel in the stores.''

In his research into the high-quality, dense and deeply coloured Japanese and Dutch denim he stocks at Culture, Mr Downie discovered an interesting fact that may have Dunedin locals wrinkling their noses. True denim aficionados don't wash their denim . . . ever.

This is probably a bit much for most people but, even so, Mr Downie believes the garments should be (carefully) washed only occasionally, so they can gradually wear to the perfect look over about six months.

‘‘Learning about this sort of thing is all part of the fun of this industry.''