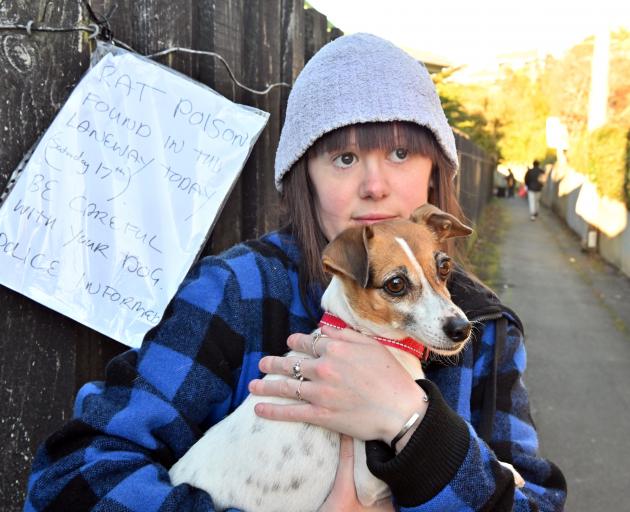 Alyssa Carty is sounding the alarm after her dog, Poppy, nearly ate rat poison pellets neatly laid out on a Caversham path. PHOTO: LINDA ROBERTSON
A Dunedin woman says her beloved fox terrier came within seconds of eating rat poison she believes was deliberately laid in a path leading to a dog park.

Alyssa Carty said she and Poppy were out for their regular walk in Caversham on Saturday when she felt a tug on the lead at the top of the pedestrian path near Hazel Ave.

She turned around and was shocked to see Poppy sniffing brown pellets she recognised as rat poison.

The four or five pellets were laid in a neat line which Miss Carty believed showed the path, which leads to the Kew Dog Park, had been deliberately baited by a person with malicious intent.

"I just basically went to pieces. I was scared and terrified."

She feared the poison could have killed her 6-year-old terrier, and went public with her discovery to urge vigilance from fellow pet owners.

"I reckon it would have just wiped her out."

After the incident, she called the Dunedin City Council and police.

An unknown party had since fixed a warning sign to a fence near where the discovery was made.

Council contractors collected the pellets, but a spokeswoman could only say yesterday it would be looking into the matter.

A police spokeswoman confirmed they received the report and said the matter had been referred to the council for clean-up, adding there was nothing officers had noted in the file to indicate malicious intent.

The job was coded in their system as "police attendance not required", she said.