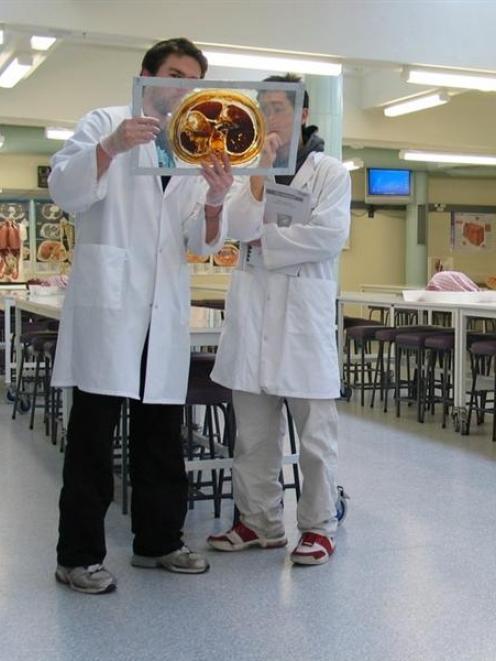 Learning experience: Medical students examine a specimen in the anatomy laboratory at the University of Otago School of Medicine, in an image from the film 'Donated to Science'.
Filming a documentary about human dissection was a challenging, but ultimately life-affirming, experience for those involved.

Now, medical documentary maker and rural hospital physician Dr Paul Trotman, of Dunedin, is anticipating the public response to his film Donated to Science, which is to screen on TV3 next Wednesday, November 18, at 9.30pm.

"Working on the film over three years was an amazing experience, which gave us the chance to work with some very special people," Dr Trotman said.

With its focus on the human dissection programme at the University of Otago School of Medical Sciences, Donated to Science was a tricky film to "sell" to funders.

The Star lent its support to the project by announcing in January 2007 that the film would be made and highlighting the difficulty in gaining funding.

"It was the response of Star readers, many of whom wrote letters supporting the film, that tipped the balance at TV3," Dr Trotman said.

Costing more than $200,000 to complete, Donated to Science had been supported by TV3 and New Zealand on Air, with funds contributed by Dr Trotman and family members.

In a unique approach, the film-makers interviewed three people who intended to donate their bodies to science - two of whom died in the following months.

Dr Trotman and his Dunedin-based production team followed the dissection process over two years and interviewed the medical students about their responses.

"The donors were absolutely amazing and had quite different thoughts and ideas on donating their bodies.

Seeing those donors had a profound effect on the students and evoked a wide range of responses from them, which was an important moment in the film," Dr Trotman said.

Made with the approval of the university's Human Ethics Committee and the Dunedin inspector of anatomy, the documentary also aimed to highlight the care and respect paid to donated bodies in the anatomy department, he said.

Professor Helen Nicholson, Dean of the Otago School of Medical Sciences, said the film had revealed a lot about the students' experiences of dissection and how difficult it was for some.

"Being involved in the film was very brave for the donors, and even braver for their families," Prof Nicholson said.

"It was a relief all round when the families saw the film and were happy with it."

In an interview after seeing the film, a family member spoke of how the film "has turned my mind around . . . just the sheer goodness of the students overall, just the sheer humility . . . these were nice, good people, and that was the making of it".

Dr Trotman said the reaction from the families was "better than we could ever have hoped for". "We are now looking to continue with these students, to make a film about what it takes to make a doctor."

Three versions of Donated to Science had been made (44-minute and 55-minute versions for television and a 80-minute feature-length version) and would be distributed worldwide by the American Public Broadcasting Service.

The film had attracted interest at the Mipcom film industry event at Cannes, Dr Trotman said.

He hopes to arrange a local showing of the feature-length version.