The safety of a Dunedin intersection where a truck-and-trailer unit crashed and rolled early yesterday is being investigated by the NZ Transport Agency.

A witness to the incident, which happened about 7.45am, said the heavy vehicle "flew" past his car when going down Pine Hill Rd before it rolled on to its side and screeched to a halt at the Great King St intersection.

A St John spokesman said the driver, the sole occupant of the vehicle, was taken to Dunedin Hospital with critical injuries.

Karl Bartleet was waiting in his car at the George St and Pine Hill Rd intersection when he saw a Summerland Express truck and trailer unit driving down the road not "totally in control".

It got faster and faster. As it went past me I could tell it was in a totally out of control speed.

"I just watched as he went past. I instinctively started to beep my horn but I knew he was out of control, so there was no point."

Mr Bartleet said the trailer went "up and out to the side" and the whole unit flipped over on to its side.

"It all happened like a movie with no sound."

The sliding truck snapped a mature tree  off at its base, bent a steel lighting pole to a right angle and spewed a trail of white plasterboard behind it before coming to  rest on its side, with its brakes steaming.

The scene of a serious crash yesterday where a Summerland Express truck rolled and came to a stop at the intersection of Great King St and Pine Hill Rd. Photos: Gerard O'Brien/ODT

"There was quite a bit of damage ... there was debris everywhere," Mr Bartleet said.

He was shocked and immediately worried about the safety of anyone in the vicinity and the driver of the vehicle.

Smoke was billowing out of the truck’s engine.

Other people in the area  reached  the truck before he did. . 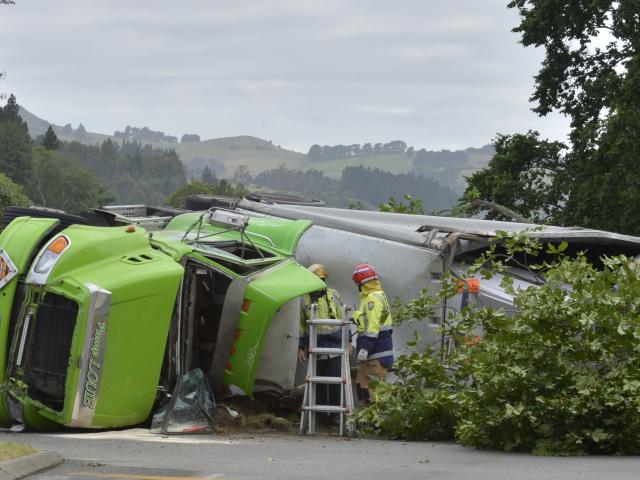 He said it was lucky the incident happened so early in the morning as it was a busy intersection. The result could have been worse if the accident  had occurred  later in the day when more people were around. Motorists travelling in and out of the city were delayed for much of the day while the truck was removed.

The intersection has been the scene of other serious crashes.

A similar incident involving a truck  happened there in April 2015.At the time, it  was reported by the Otago Daily Times as Dunedin’s highest risk intersection.

No statistics were immediately available on the number of crashes at the intersection.

A police spokeswoman was  unable to comment further on the intersection or the cause of the crash as it was under investigation.

Summerland Express Freight was approached for comment  but declined to do so.