By Vaughan Elder
1 Comment
A Dunedin resident got a ''massive shock'' this morning when a power pole smashed on to his property after a ute crashed into it. 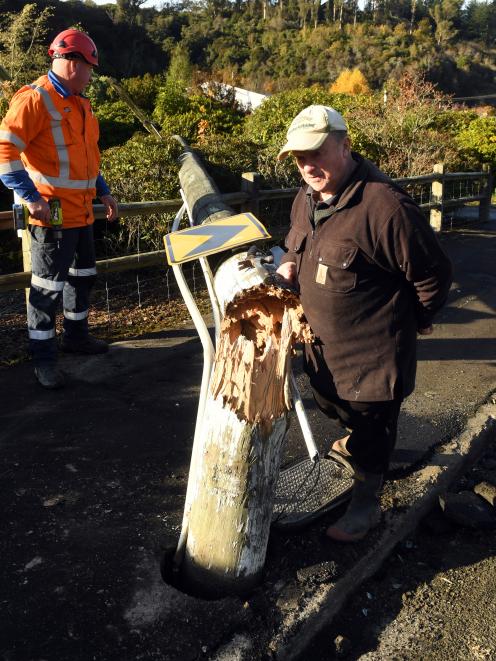 Malvern St resident Bruce Walker checks the damage to the power pole after it was knocked over this morning. Photo Stephen Jaquiery

The driver of the green Nissan ute which crashed into the pole on Malvern St, in Leith Valley, did not stick around after knocking over the pole.

The driver was seen by neighbours quickly fleeing the scene.

Bruce Walker said he was on the phone to his son about 9.30am when he heard an almighty crash, which was followed by the noise of wires hitting the roof of his Malvern St house.

After going outside he found a power pole, which was cracked near its base, lying across his section.

Given the damage to the pole he was surprised the driver was able to flee the scene.

He had been told by neighbours the driver took the corner near his house ``pretty quick''.

The area was a hive of activity after 11am, with contractors working to replace the pole and restore power and internet services.

A Delta spokesman said the pole which came down was owned by Chorus and carried both phone and internet lines and electricity lines.

Power was cut to two homes as a result and Delta was working to replace the pole on behalf of Chorus.

It was expected power would be restored to the two affected households later this afternoon.

An interesting note is this pole is owned by Chorus, not Delta / Aurora. We have been led to believe the Aurora maintenance program (or lack of one) would be addressing all old power poles.
Just how many more Chorus owned poles are around Dunedin and are they being as badly managed as Aurora's have been?