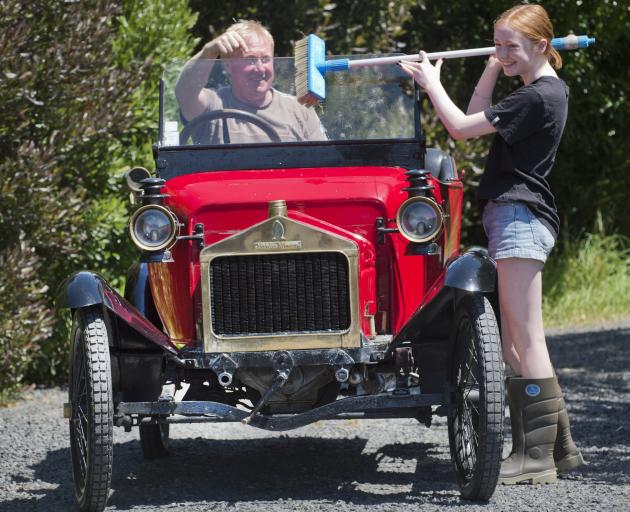 "We used to come to the Dunedin Brighton Rally back in the late ’70s, and my sister and I had to get out and walk up to the top of Lookout Point because the car didn’t have enough power to take passengers.

"Dad had a friend who described it as a car that used to be able to find hills where there were none.

"It only has 8 horsepower. Most ride-on lawnmowers have three times the horsepower."

Despite the British-built veteran car’s shortcomings, Mr Boult said he still loved it.

"You’re only ever one outing away from a breakdown in a veteran car, but they really are lovely old vehicles.

"It brings a little bit of joy and happiness to people.

"As you’re driving along the road, everyone wants to wave at you. For some reason, those old brass cars, everyone seems to like them."

It also had sentimental value to him, because it brought back memories of his late father George, and his constant tinkering under the hood.

"He was given the engine by a mechanic in Gore and he managed to find the rest of the car at Mid Dome [in Northern Southland], and he put it all back together again."

Since his father’s death in 1986, Mr Boult had taken over the maintenance of the car.

He hoped his trip over the hills to Brighton would not be an issue on Saturday.

"We’re hoping that the engine rebuild that we did about four years ago will solve that problem."

It will be one of about 40 vehicles participating in this year’s Dunedin to Brighton Veteran Car Rally on Saturday.

Rally organiser Colin Winter said the vehicles would arrive in the Octagon about 10am, and it was hoped Dunedin Mayor Aaron Hawkins would wave them off to Brighton about 11am.

"it was hoped Dunedin Mayor Aaron Hawkins would wave them off to Brighton about 11am" likely it will be Lee Vandervis again as this kind of thing is beneath hawkins.