Ardern is wrapping up her trip to Europe and the UK today.

Dunedin-based author Emma Wood said she found out about the royal book gift when she woke up this morning.

"I found out with everyone else really, this morning when I awoke I had a lot of messages on my phone, sharing the link to various media stories that Tulip and Doug had been presented to Prince William today.

"So that was a very exciting start to my otherwise very routine Sunday." 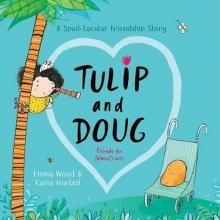 Tulip and Doug is about a girl who loses her best friend, a potato.

"It's been pretty overwhelming. I've had lots of messages from friends and fellow authors and educators congratulating me on that too.

"It would be good also to mention that the illustrator, Carla Martell, is the equal partner in the creation of the book, so it's equally exciting for her too.

"It's just been a very lovely day. Everyone's been very positive and I'm really just thrilled that the book has been recognised this way."

Wood said she plans to celebrate by having takeaways tonight.

Ardern has previously posted online about her affection for the book, "a real fave of mine" and her daughter Neve.

Ardern wrote about the visit to Prince William on social media as she prepared to leave London.

"Today I had the chance to catch up with the Duke of Cambridge.

"We talked about a whole range of things but at the end I took the chance to share a bit of merch for the upcoming Rugby Women's World Cup, which we're hosting this year!"

Among the accomplishments on this trip is a new free trade deal with the European Union and a series of visa changes for New Zealanders visiting and working in the United Kingdom.

"It's been a busy but great couple of days," Ardern wrote.

Ardern was not scheduled on this trip to meet with the Queen, who at age 96 has been limiting her engagements, although she did plan to have a phone call with Prince Charles.