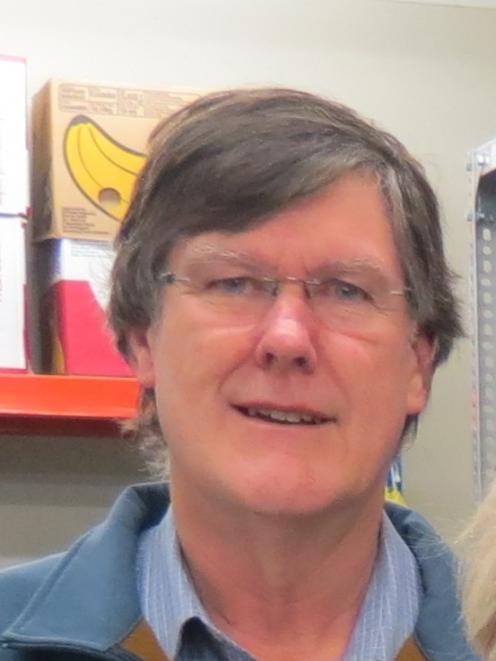 David McKenzie. Photo: ODT files
Dunedin people are being evicted from their rentals and struggling to keep a roof over their head, as a new report reveals the city’s houses are more unaffordable than Wellington’s.

Dunedin ranked fifth of the eight with a median house price of 6.9 times the median household income of $68,000.

The report also showed unaffordability grew in the city since last year’s report, when the average price was 6.1 times the median wage.

Tauranga-Western Bay of Plenty was the least affordable, costing 9.3 times the local median wage, followed by Auckland (8.6), Napier-Hastings (7.4) and Hamilton (7).

"That’s when we started to see pressure on rents, people being evicted because landlords are selling," he said.

The Salvation Army ran a transitional housing service in Dunedin, which usually provided accommodation for about 20 people at any given time, he said.

"You see it when people turn up at your door and say, ‘I’ve been looking for housing, I can’t afford what’s there, I’m at the end of my tether’.

"We see these stories every day."

The news also followed the release of CoreLogic figures earlier this month that showed house prices in Dunedin had soared past those in Christchurch.

The city’s house prices rose 18% over the past year, significantly outperforming other major centres.

Demographia survey co-author Hugh Pavletich said there was no doubt housing affordability was getting worse.

"This survey is a huge wake-up call, basically, for all involved at central and local government.

Mr Pavletich said high house prices were "a threat to the middle class".

That was a problem for everyone because the middle class included teachers, nurses, firefighters, police officers and social workers.

Meanwhile, the number of people on the waiting list for state housing has more than doubled in the past two years to just under 14,000.

The Government has budgeted more than $2 billion this financial year for rent subsidies and emergency housing grants. — Additional reporting RNZ

Anecdotally (Dunedin TalkBack caller), landlords are increasing advertised rents on the spot, according to the crowds that turn up to view.

I was going to build a new 6 bedroom rental but all the rules, regulations and snotty attitudes convinced me that doing nothing but waiting for the value of what I already have to increase in value, was a much better option.
This government is good at predicting end of days and building the odd state house but strangles the life out of everything it controls.

No one expects property owners to act as altruistic suppliers of housing.

If the Government was controlling the Market it would introduce rent regulation.

There are some glaring inaccuracies I need to point out. The middleclass has been in decline in Dunedin long before the housing shortage. There are insufficient jobs that would allow individuals or couples to make enough money to be considered middleclass. Dunedin now is comprised of the “haves” and the “have nots”; predominantly “have nots”. Most of the people I know are living paycheck to paycheck or working multiple jobs to make ends meet. The ODT and DCC can spin it anyway they want but the truth is Dunedin is a dying city. Its dying because of a lack of leadership by the DCC. Not just the current cast of unremarkable and unqualified “elected” members but years and years of them. Years and years of taxpayer abuse and neglect. The leadership has made a conscious decision to base the economic viability of the community on three areas: the University, local government and entities supporting the two. Everything else has closed and moved. Dunedin is dying a slow death thanks to the leadership we’ve elected. People need to start asking themselves; given the housing situation, how are we going to build a new hospital? Where are the workers going to live? DCC has failed us!

Sad commentary about the state of Dunedin! Most of the homes in Dunedin are substandard; no insulation, no double glazing, poorly built and poorly maintained. My husband and I are buying as many properties as we can so we can support the hospital build. Dunedin will have a huge influx of workers who will need accommodations to build the hospital. Unfortunately, the hospital build is more important than the other issues raised in this article. Maybe if there were a larger number of qualified workers from Dunedin I wouldn't feel this way. We need to ensure the hospital is built for the people of Dunedin.

WandaW - it’s people like you that make this issue worse. The ‘many properties’ you’re purchasing to no-doubt charge exorbitant rents on (as you know they’ll be in demand) should be made available to the local population first.

Dunedin gdp2 was held up by a single complaint, this single complaint held up the resource consent to New homes, this helped in driving up rents and house prices. Not much out there for a 20k deposit and must have a 2 bay garage.

There's a very short list of people benefiting from this boom and a very long list of losers. Every time I return to Dunedin the traffic is worse, the property prices are higher and the weather is just the same... even good old Dunners charges to the very outer limits of town for parking. Sorry Dunedin, you're running out of reasons for me to come back

Funny, seems all the people that voted in this COL are the same ones having problems since the rules they introduced came into force.
Hopefully they remember this come election day so we can put them, but labour will open the books for election bribes, with no doubt the same idiots voting them back in to make their lives even worse/harder.
Some people are just gluttonous for punishment