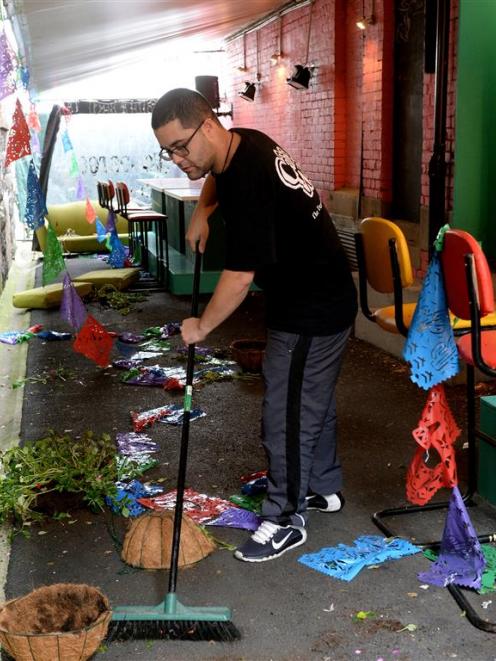 Alley Cantina manager and head chef Lenin Matahaere cleans up a mess left by vandals early yesterday. Photo by Linda Robertson.
The owners of a Dunedin restaurant had to deal with a cleanup they were not expecting, and faced a bill of nearly $1000, yesterday.

Mike and Ruth Bankier, who own the Mexican restaurant Alley Cantina in Dunedin's George St, arrived at the restaurant yesterday morning to discover vandals had ransacked the outdoor seating area.

The repair bill would be about $900 but the real damage done was to the restaurant's character, Mr Bankier said.

"The ambience is gone. The development of that area has been ongoing for the last three years.

"We've kept adding to it and we still had more to do.''

The property's gate, which secured an alleyway leading to the outdoor area, and the restaurant's main door, were closed about midnight Saturday, Mr Bankier said.

It appeared the vandals had jumped over the gate to gain access.

"It's heartbreaking, really, when you're trying to build something up in Dunedin and are trying to create an ambience and it gets trashed.''

Mr and Mrs Bankier had been in the restaurant industry for 45 years and had opened Alley Cantina three years ago.

They had reported the incident to police, Mr Bankier said.