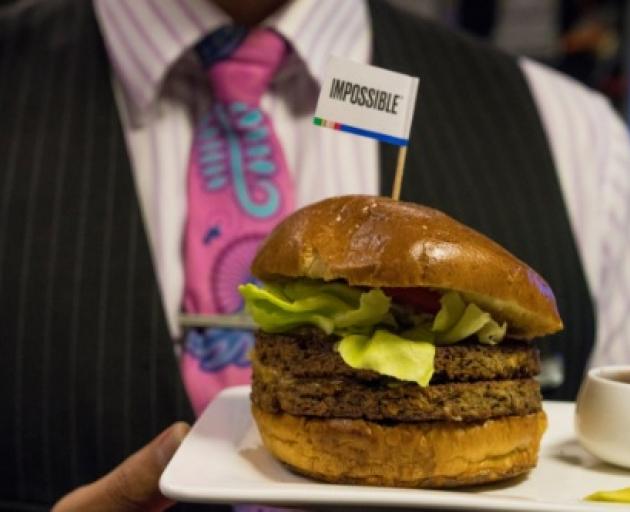 Air NZ has started serving the Impossible Burger as a menu option on its twice-daily Business Premier flights from Los Angeles to Auckland.

The US-made product is plant-based, but has a meat-like texture and tastes and "bleeds" like meat.

The foodstuff has unexpectedly become a political issue, with Acting Prime Minister Winston Peters saying Air NZ should be promoting top-end New Zealand meat products rather than the US faux burger.

The uproar over the burger was dismaying, Dunedin surgeon Mark Smith, who specialises in surgery on the obese, said.

"I'm not saying that we should all stop eating meat or dairy, but I think it's important to acknowledge that we could all do with a bit less meat or dairy in our diet," Dr Smith said.

"That would be beneficial for our health in many ways, especially concerning obesity, cardiovascular disease and cancer.

Dr Smith, a pisceterian, said meat-free burgers should be seen as a positive rather than "the end of all we hold true."

There was ample evidence that the amount of meat and dairy in the Western diet was unhealthy and should be reduced, Dr Smith said.

"Obesity is one of the leading causes of premature death and disability in New Zealand, and three out of 10 New Zealanders suffer from obesity."

Coincidentally, the New Zealand Government has recently been exploring these exact issues, and last month the Ministry for Primary Industries released three reports on alternative meat products - including the Impossible Burger.

"In order for New Zealand to retain a competitive edge in our primary exports, we want to ensure we are looking ahead at what the future consumer might demand in our products and what opportunities are available for our sector," Jocelyn Eason, general manager science food innovation at Plant & Food Research, said.

The Impossible Burger case study report found the product had made considerable steps, but further innovation would be needed before it posed a threat to the beef burger's pre-eminence.

So some doctor believes it is far better to eat an unknown concoction of chemicals, greases and who knows what than to eat a sensible sized portion of beef or lamb.
Too much meat may be bad for me, but so are artificially created and coloured pads of muck.

If Air New Zealand wishes to offer a vegetarian alternative to their passengers, fine, as long as they also provide good natural dishes as well. If anyone wishes to consume products made with unknown substances and side effects, that's also ok as long as they're not forced on me.

Should New Zealand exports of beef be affected by the introduction of the impossible burger, with a bit of luck prices within New Zealand will come down and the average person will be able to afford decent beef.

While Doctors are intelligent, highly educated people, they have been known to make rash, illogical and ridiculous claims. Many years ago they said that eggs and potatoes were bad for us. Now they're saying that it's ok to consume as many eggs per week as we wish. If I ceased providing my Husband potatoes with nearly every evening meal, the heavens would fall in on chicken licken's head. Meals made the same as my Mother and my Husband's Mother did, with no added junk worked when we were young and that's good enough for us now. We don't suffer the crazy allergies to seem to affect an extremely high proportion of the population of today and I lay the blame squarely on additives.