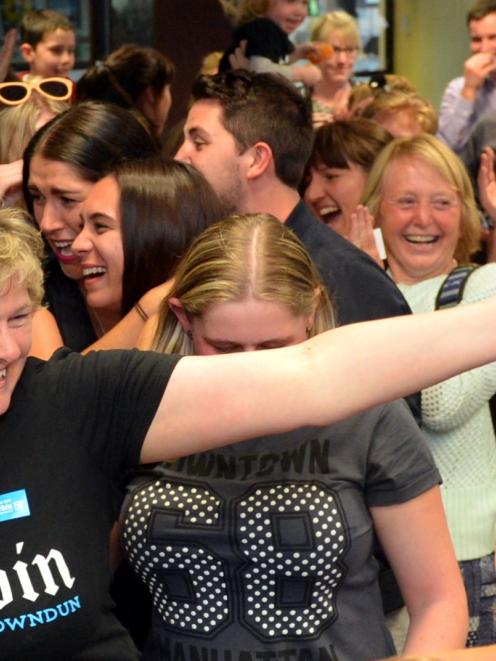 The crowd celebrates at the Dunedin Gigatown office. Photo by Peter McIntosh
Dunedin has won the Gigatown competition it was announced tonight in Wellington.

A crowd at Dunedin's Gigatown office almost lifted the roof with cheers and screams as the city was announced the winner of the Gigatown competition.

About 150 people had to wait a full 23 minutes after the announcement was expected to hear the result, and the release of emotion was after that wait was ear shattering.

The result of the Chorus competition was streamed live from Wellington.

Mayor Dave Cull, who was int the capital, said although the city has taken the Gigatown title, along with new ultrafast 1Gbps broadband and funding for $700,000 worth of UFB-related initiatives across the community, Dunedin has gained ''so much more through its involvement''.

"This has been a time for us to think about the possibilities that 1Gbps ultrafast broadband will open up for Dunedin.''

Other towns in the running were Wanaka, Gisborne Nelson and Timaru.

The final category involved each finalist town creating a ''Plan for Gig Success''.

This was a written submission and video summary describing how each town plans to activate the economic and social benefits of town-wide access to gigabit fibre.

The points from the final category are worth 50% of the competition total.

The competition was launched by Chorus in October 2013 with 50 cities and towns across New Zealand competing to become the country's first Gigatown.

That would mean access to much faster internet speeds - one gigabit per second internet connection - at the price normally paid for entry level broadband.