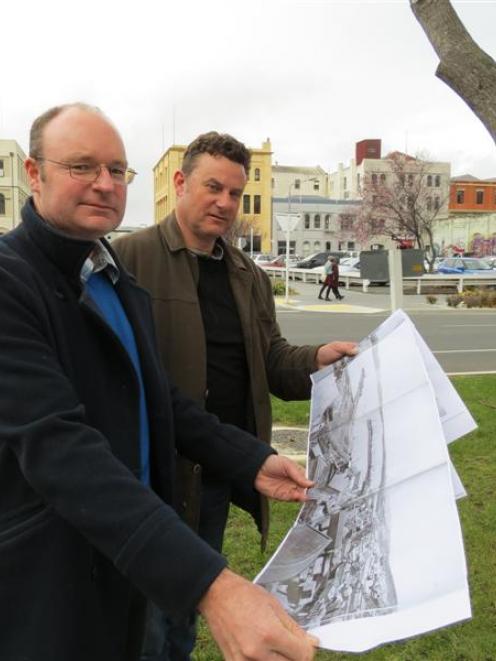 Looking over some historic photos of Dunedin are Heritage New Zealand regional archaeologist Dr Matthew Schmidt (left) and Dunedin Amenities Society member Paul Pope. PHOTO: BRENDA HARWOOD.
The extraordinary feat of pick-and-shovel engineering that altered Dunedin's shoreline by up to 700 metres in the 1860s is highlighted in a new walking trail.

The Dunedin Shoreline Trail, which marks the city's harbour boundary in 1865, will be launched next week during the Dunedin Heritage Festival, which celebrates 150 years since Dunedin became a city.

The brainchild of Heritage New Zealand (HNZ) regional archaeologist Dr Matthew Schmidt and Dunedin Amenities Society member Paul Pope, the Dunedin Shoreline Trail brings together years of research into the city's history, above and below ground.

''We felt the heritage festival was a good opportunity for us to create a temporary walk, for now, that will show people how much of Dunedin was reclaimed and how different the early shoreline was,'' Dr Schmidt said.

Mr Pope said creating the 1865 shoreline walk would also help to highlight the city's built heritage and to help link the central city with other walks around the area.

''There is definitely potential for it to link up with other walking opportunities around the city, and to be of great interest to people,'' he said.

''One thing I have learned in recent years, is that there is a real demand from local people to know about local history.''

The trail would initially be temporarily marked out using stencils, but it was hoped to eventually make it a permanent part of the city's landscape, Mr Pope said.

The city's first pakeha settlers stepped ashore in 1848 at the top of what is now Water St, in the Exchange area, encountering a marshy estuary shoreline bounded by steep, forested hills. Reclamation started almost immediately, with settlers dumping anything they did not want into the harbour.

In 1861, the discovery of gold in Otago led to a rapid expansion of Dunedin and increased demand for flat land. In the 1860s, this led to the removal of the rocky promontory of Bell Hill (where First Church now stands) via pick and shovel, and the use of this material and other construction rubble to fill in the harbour.

''Essentially, anyone who was doing any digging was invited to bring it to the harbour,'' Dr Schmidt said.

In just a few short years, tens of thousands of tonnes of material had gone into the harbour, adding up to 700m of land by 1870, he said.

The work continued apace until 1889 and further reclaimed land has been added since.

Dr Schmidt has been involved in mapping the shoreline for several years, through his work with HNZ, which oversees an development work done in the city's heritage precincts.

Describing the reclaimed shoreline area, which extends from the Exchange to Logan Park, as ''one massive archaeological site'', Dr Schmidt said its archaeology had been protected since 1975. This means that when development work is done in the area, HNZ arranges for an independent archaeologist to assess the site, and then grants an authority to ''damage or destroy'', depending on what is found.

''This is why we have such a good record of what was happening in the area.''

Over the years, many fascinating artefacts had been discovered this way, from original jetty piles, shipway timbers, and building foundations, to the leavings from ironmongers and jewellery manufacture, Dr Schmidt said.

Recently, exciting archaeological finds had been made in St Andrew St and at the new Emerson's Brewery site, including the remains of a harbour causeway and a large dump of glass bottles, he said.

Mr Pope and Dr Schmidt will launch the Dunedin 1865 Shoreline Trail by leading a guided walk next Sunday, August 30, at 11.30am. The free hour-long walk will depart from the early settlers' plaque at the top of Water St and proceed along the early shoreline to St Andrew St, with descriptions of interesting archaeological and built heritage features along the way.