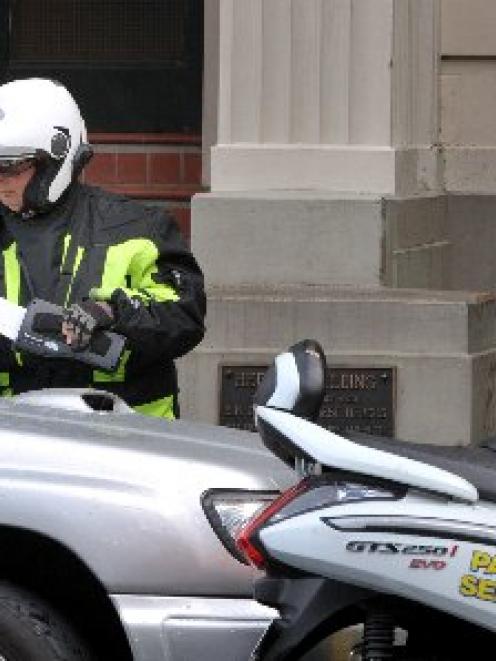 Photo by Christine O'Connor.
Threats to kill, hit-and-runs and torrents of abuse - Dunedin's streets are becoming a battleground as angry motorists vent their frustration at the city's parking officers.

It is a Dunedin parking officer's worst nightmare - an angry motorist coming at them with clenched hands and a face red with rage.

But, according to the Dunedin City Council, it is a scene playing out all too often, as officers have been attacked, abused or threatened nearly 200 times since mid-2009.

The incidents varied, from hurled hamburgers and hot coffee, to incidents of violence and intimidation, including motorists who rammed officers' scooters and rained blows on them.

The encounters have prompted a call for calm from council chief executive Dr Sue Bidrose, who said the treatment being meted out to the city's parking officers was ''pretty appalling''.

''These guys are public servants ... but they're not public slaves. They're not there to be beaten and abused.''

And Dr Bidrose should know, having taken to a DCC scooter herself to observe a typical day, only to encounter several ''horrible incidents'' between motorists and the council's parking officers.

''If the day I went out is anything to go by, people are rude simply because they're there,'' she said.

The reports highlighted the verbal abuse and angry confrontations encountered by parking officers carrying out their daily duties.

Among the most serious incidents were cases of motorists assaulting parking officers and using their vehicles to knock officers' scooters over, the reports showed.

In one case, an officer writing a ticket in 2011 was set upon from behind in Great King St by an assailant, who ''was trying to rip my eye out'', the report said.

In another, later the same year, an officer issuing a ticket in Carroll St was abused, then ''chested'' by the offending vehicle's driver.

The man then returned to his vehicle and drove into the officer's scooter, knocking it over, before leaving the scene, the report said.

In a third incident, from 2010, an officer riding past three males in Arthur St was abused by the group, then chased down the street by one of them.

The officer was caught when forced to stop for traffic at an intersection, and knocked from his bike by the assailant. He was protected from further aggression by a bystander, the report said.

But physical violence was not the only hazard the officers faced. Threats and verbal abuse, sometimes backed by weapons, were also on the list.

That included one man clutching nunchucks - a traditional Japanese martial arts weapon - while threatening to kill an officer, and another who made a gun gesture while doing the same.

Another motorist urged a parking officer in 2013 to ''get a real job'', then suggested the officer stop writing tickets and start writing a suicide note.

Insults were not the only things thrown. Officers were on the receiving end of hamburgers, eggs, water balloons and hot coffee. The officers also gave as good as they got in at least some incidents, including a 2011 encounter during which an officer had a laser pointer shined in their eyes by a teenager in George St.

''I went over the road and told him if he pointed that laser at my face again I would punch him in the ... head,'' the officer wrote.

Dr Bidrose told the ODT the city's officers performed a difficult role, and could ''lose their temper too'', but each complaint against them was also investigated.

Despite that, some motorists saw parking officers as a ''money-raising exercise'', while the reality of their role was overlooked.

''These are a group of people who get paid less than the average New Zealand wage. These aren't high-rolling bureaucrats ... and they're out there in all weathers, every day.

''What they do is they keep the traffic turning over, so that it's pretty easy to find a park. And for that, people just let rip with road rage. It's pretty appalling.''

Police were involved in some of the more serious incidents detailed in the reports, but it was not clear yesterday how many ended in a court appearance.

Council staff said collating that information would be time-consuming, and withheld details of how many parking officers had taken time off as a result of their encounters.

Dr Bidrose said parking officers were resilient and enjoyed positive feedback from the public as well, but urged motorists to ''say thanks'' instead of hurling abuse.