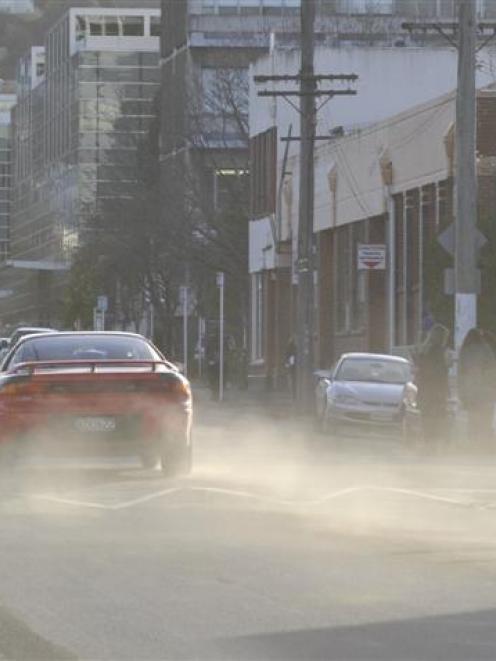 A car throws up a cloud of dust in Albany St, Dunedin, where airborne dirt and soil particles have been blamed for several breaches of national air pollution standards in central Dunedin. Photo by Gerard O'Brien.
Dirty, dusty Dunedin roads may need better monitoring to ensure air-pollution standards are not being breached in the central city, despite differing opinions from local councils about how serious the problem really is.

While vehicle exhaust emissions are often thought of as the main contributors to airborne pollutants, the results of an ORC study blamed dust and dirt being dispersed from the wheels of construction-site vehicles.

ORC environmental and science director John Threlfall says the study results showed controls around vehicle movements from construction sites needed to be dealt with during the consent process.

However, the ORC and the Dunedin City Council have differing opinions on what is required to address the problem, given a localised convergence of coincidental factors.

While the ORC is responsible for monitoring air-pollution levels, the DCC is the road-controlling authority for the city and also in charge of enforcing building and resource consents relating to construction sites.

The DCC is also behind the two construction projects which are seen as the main contributors to the vehicle movements in the central city area around Albany St - Forsyth Barr Stadium and the State Highway 88 realignment.

Construction is continuing on the University of Otago plaza fronting Anzac Ave.

DCC transport operations manager Graeme Hamilton questioned whether the same amount of airborne dust and dirt would still be present in the central city given the completion of "two of the biggest construction projects we've seen".

While the DCC was responsible for monitoring construction-site consents and also for ensuring local roads were kept "free and clean of detritus", there were associated costs, he said.

"Are we going to be fixing a problem which won't be there by this time next year?" he asked.

Mr Threlfall acknowledged the amount of coarse particles contributing to the air-pollution breaches within the central city were a "rare occurrence" and may not be present in future studies.

However, the identified issues "certainly should" be addressed, given the air quality was being "dominated by dust".

The ORC was responsible for ensuring central Government-issued air pollution standards were not breached, he said.

The dust in the area created adverse effects for local residents and had the potential to affect quality of living standards, Mr Threlfall said.