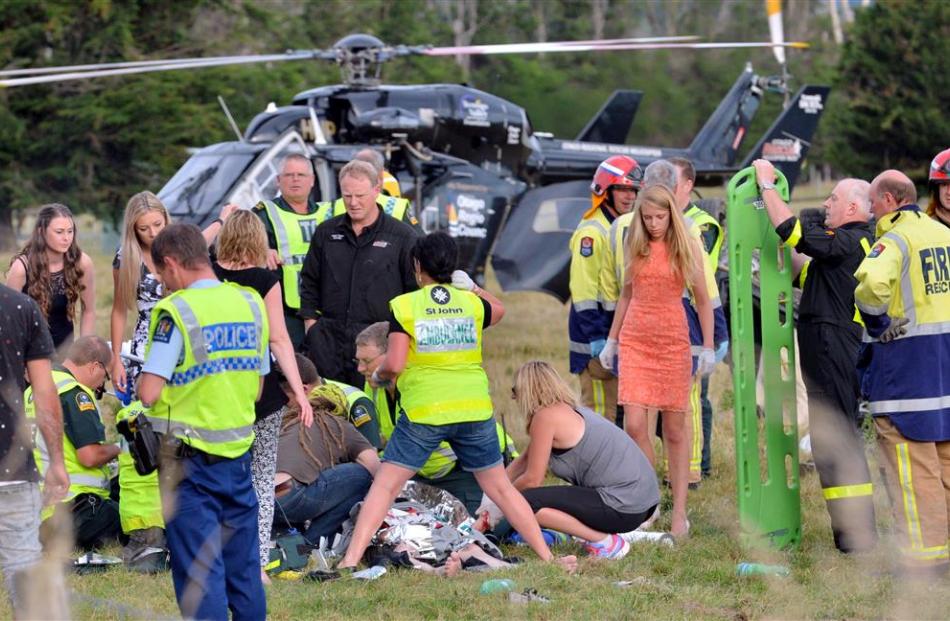 Emergency services, aided by off-duty nurses, tend to a victim at the scene of a car crash near Outram on Saturday. Photos by Gerard O'Brien. 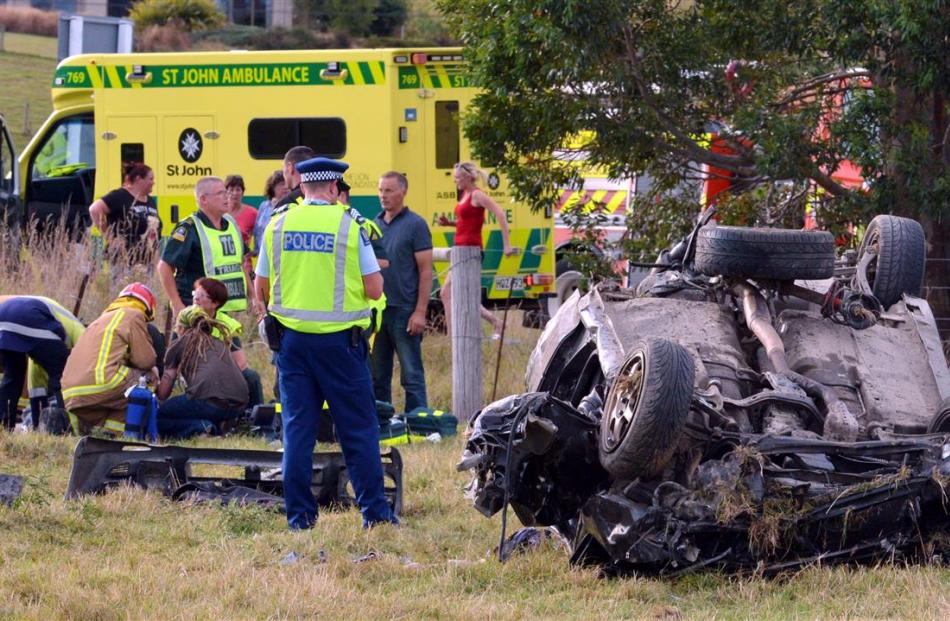 Emergency services, aided by off-duty nurses, tend to a victim at the scene of a car crash near Outram on Saturday.

Police are praising the actions of a group of off-duty nurses who rushed to the aid of five men injured in a serious car crash near Outram on Saturday.

Three people were thrown from the vehicle, which was left mangled after it left State Highway 87, ploughed through a fence and rolled about 5pm.

Among those first on the scene was a carload of nurses who, according to a witness, were on their way to a wedding in Outram.

They tended to the men until emergency services arrived.

Constable Jonathan Chatfield, of Mosgiel, said the men were very lucky to receive the help they did.

"They wouldn't be in the shape they are now if it wasn't for the actions of the nurses,'' he said.

"Getting the right medical attention straight off has definitely worked in their favour.''

One man was flown to Dunedin Hospital in a critical condition and another was taken by ambulance in a serious condition.

A further update of the men's condition was not available last night, police said.

Const Chatfield said the crashed car had a current registration and warrant of fitness.

Police were investigating whether the car was travelling with other vehicles before the crash and whether that was a factor in its driver losing control.

"It's possible they [the occupants] were being followed, or had been followed,'' Const Chatfield said.

"We've still got to talk to everyone that was in the car at the time.''

Police were also investigating whether speed was a factor in the crash, although initial information suggested it was travelling at the 100kmh speed limit.

The three men with moderate injuries had told police they were wearing seatbelts at the time of the crash, Const Chatfield said.

He had not yet been able to speak to the two more seriously injured men.

Sergeant Jared Kirk said three of the car's occupants were thrown from the car when it rolled several times through a paddock.

Tyre marks were visible across the highway leading to where the vehicle left the road.

It appeared the car left the road heading north and the driver lost control on the highway's grass shoulder.

The car then crossed the centre line and ploughed through the grass shoulder on the other side of the road before crossing a ditch and crashing through the fence.

The car travelled at least 50m into the paddock before coming to a stop upside down and facing south.

A woman at the scene said a motorist trailing the car had seen it speeding with two others leading up to the crash.

"He reckoned they were going around the corner at 100[kmh] plus,'' she said.

A witness to the crash described the scene.

"There were people all over the paddock.''

The three men who suffered moderate injuries were taken to hospital by ambulance, he said.

Sgt Kirk said the men lived in the Dunedin and Mosgiel areas and were aged between 22 and 34.

"A scene examination is under way involving the serious crash unit,'' he said.

"The cause of the crash at this stage is not known and it is too early to say whether charges will be laid.''