Eager emus, odd dogs all part of the job 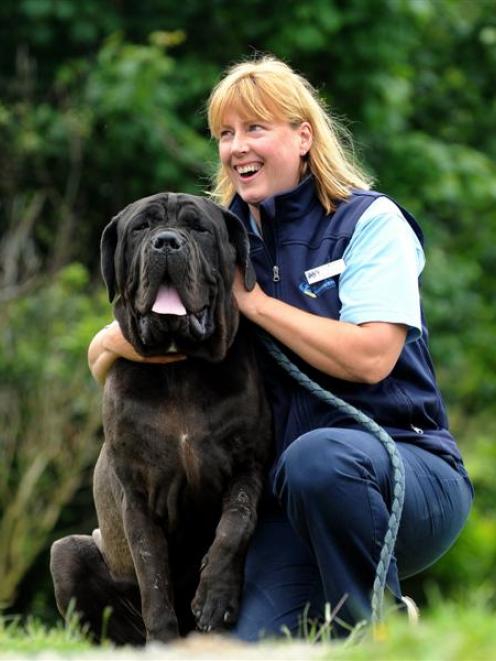 Dunedin City Council animal control and education officer Roz McDonald, with a Neapolitan mastiff impounded after it was found wandering in the Meridian Mall. Photo by Peter McIntosh.
There are days Roz McDonald's job seems to go to the dogs ... and emus, and livestock ...But she wouldn't have it any other way.

The Dunedin City Council animal control and education officer enjoyed not only working with animals, but educating people about them as well.

"I used to be a vet nurse and then this job came up. I was attracted to the education because I did a diploma in education," she said.

Ms McDonald works as one of five animal control officers who spend most of the time on the road responding to callouts and complaints.

Their work was "95% dogs" but "large animal skills" were essential as they could be called to help with anything from livestock on roads, to barking dogs and attacks.

"Anything goes. You might be in Middlemarch speaking about unregistered working dogs, or dealing with an abandoned pitbull who has killed 40 sheep over a period of time. It's always going to be different," she said.

One of the strangest callouts she had was to "wrangle" an emu after it escaped its paddock and ended up on Main South Rd, Green Island, in the rain, at 11pm.

One of the funniest was tending to a pitbull who spent about 40 minutes attacking a swing at Bathgate Park.

"He had about 30 people watching him by the time I got there. I had to pole him off it, he was so fixated," she said.

While the biggest waste of her time was a woman complaining about bags of dog poo being left on her neighbour's fence.

When Ms McDonald arrived, she discovered just one plastic bag on the fence, which was empty.

"I went to an empty plastic bag," she said.

Daily work included maintaining a visual presence by patrolling the city, especially the Esplanade as it was a "no dog area", handling complaints, and working at the pound.

The team received about 3000 complaints last year, a number that was increasing annually.

"One person might get 10 complaints to deal with a day."

The most common and difficult to resolve were barking dogs. The approach she often took was to provide the complainant with a "bark control sheet" to record how often the animal was actually barking.

This often proved invaluable, as the person would realise the dog only barked for two minutes one afternoon, and five minutes two days later.

"Outside of that core work we are doing the unregistered list," she said.

That involved physically visiting the homes of all unregistered dogs in the city, talking with their owner and issuing infringement notices.

If the registration was not paid, the dog was seized.

"A lot of people think we are going to go away, unfortunately we don't. The most depressing thing is this time of year with people who can't afford their registration and they've got no food in the cupboard ... and you are wanting $120 for registration."

Dogs collected this way, and those found loose on the streets, were placed in the pound.

If, after seven days, they were not collected, the dogs were destroyed.

"I think people think we don't like dogs, but we are actually all dog owners and love dogs, that's why we do the job - it's trying to make the dogs' lives better," she said.

In her education officer role, Ms McDonald spent 25% of her time visiting schools, community groups and organisations to educate them about dogs and how to treat them.

"If it's a primary school, I pretty much cover the safety - how not to get bitten, what to do if a dog rushes up to you, things like that."

Despite all the things she has seen on the job, Ms McDonald believed all animal behaviour came down to the owner.

"It's always the owner. Often the dog is not behaving properly because the owner is not fulfilling their needs. Some people think they can leave a dog in the back yard 24/7," she said.

While some dogs were harder to train, or noisier than others, providing them with enough exercise, "every day, not just when you feel like it", was key.

"It is exercise, discipline, affection, not the other way around. It's quite simple."