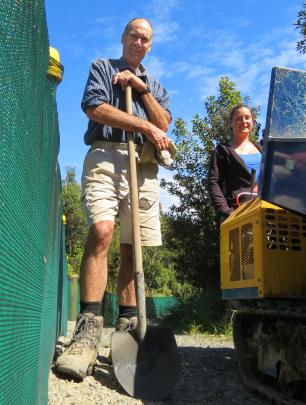 Orokonui Ecosanctuary has been steadily building its place in New Zealand's conservation network since it was fully enclosed with a predator proof fence in 2007. Now, it has taken another big leap in its importance to the country by becoming a creche for the critically endangered Haast tokoeka kiwi. Dan Hutchinson reports.

Orokonui Ecosanctuary has joined the fight to save rare and critically endangered Haast tokoeka kiwis with a new ''kiwi creche''.

Staff finished fencing a 15ha enclosure this week and expected to take delivery of the first five kiwi chicks on Tuesday next week.

It just makes us a bit more useful to the Department of Conservation.''

Left to their own devices in the Haast Ranges, 95% of Haast tokoeka chicks would die before they reached adulthood, compared with a 65% survival rate if given protection.

Eggs are taken from the wild in Haast and incubated at the West Coast Wildlife Centre at Franz Josef.

Once they were big enough to fight off a stoat - the kiwi's main predator - they would be returned to the Haast Ranges to live in the wild.

Staff and volunteers at the sanctuary have spent an estimated 900 hours building a low fence around a 14ha section of the sanctuary to keep the new arrivals separate from the population of 19 adult kiwis.

Mr Smith said adult kiwis were known to kill chicks so they needed to be kept separate and the chicks needed about 1ha each.

They would also need to be fitted with a transmitter so they could be recaptured and monitored.

The new creche borders on the predator-proof fence encircling the entire 307ha sanctuary, reducing the length of new fences required.

Mr Smith said the ecosanctuary could now house up to 15 birds and if the creche was successful they could double its size and take up to 30.

''With a population of just 400, we have to do all we can to give every new bird the best possible chance of survival.''

She said protecting kiwis as eggs, chicks and juveniles gave them a 65% chance of making it to adulthood.

Orokonui Ecosanctuary general manager Chris Baillie said the creche was located in the most public area at the top of the ecosanctuary but it was ''first and foremost a conservation project''.

''While we would love for more people to see our national icon, we need to see how the young kiwi settle in before we can say what visitors may be likely to encounter,'' Ms Baillie said.