Electorate jigsaw a tricky one to work out

Where in the world does it make sense that the Clutha district is not in the Clutha electorate, that a decent chunk of Dunedin’s southern suburbs are in Dunedin North, and that the deeply inland town of Wanaka is represented from the port of Oamaru?

Welcome to the wacky world of electorate boundaries, where populations are squashed into uncomfortable corners in the name of legislative requirements.

The draft electorate boundaries for the 2020 and 2023 elections were released a fortnight ago.

As predicted by Southern Say in September, the Representation Commission was not brave enough to sanction a wholesale redrafting of the South Island seats to create a much-needed electorate in the Lakes district. 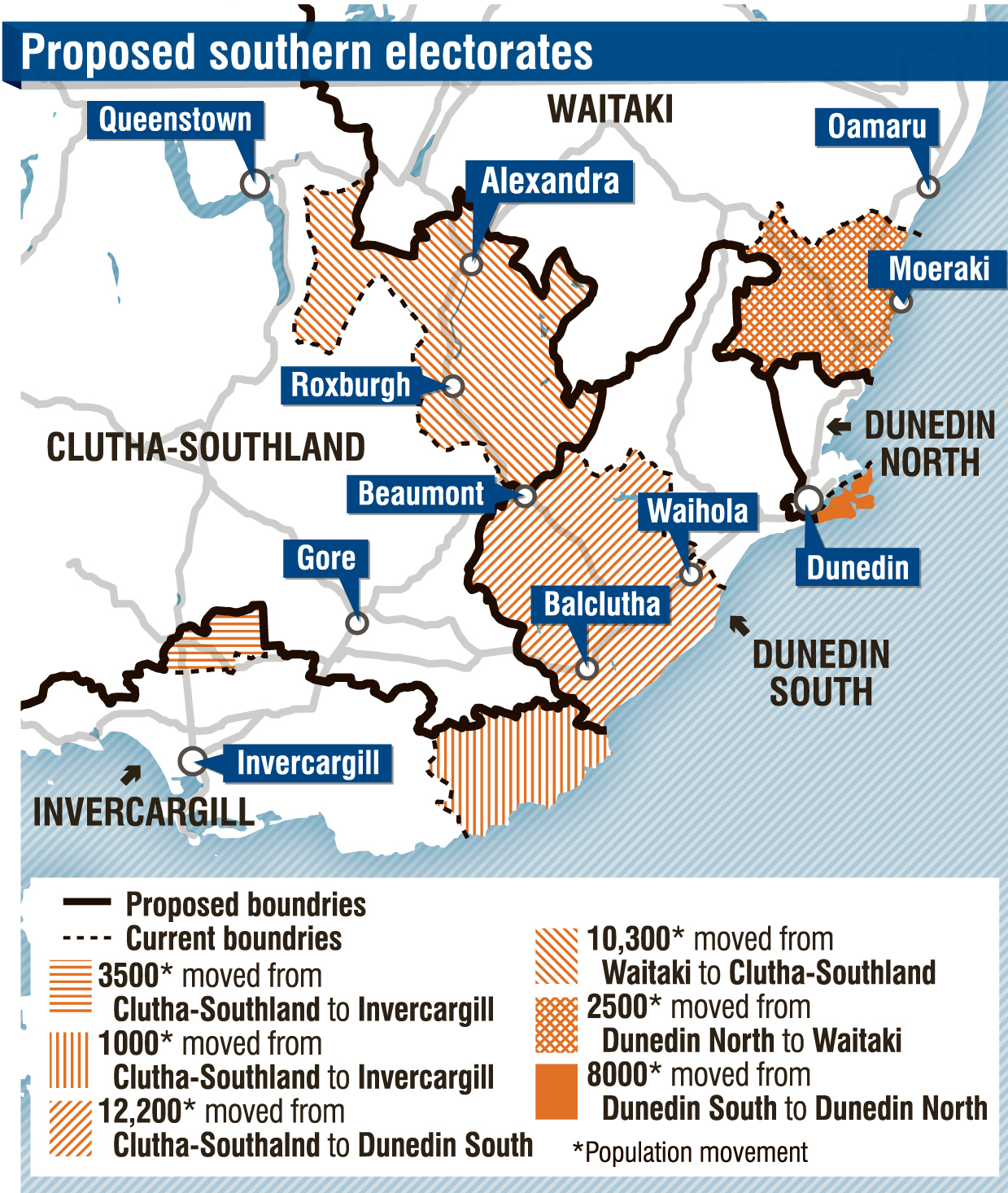 However, it did embark on a surprisingly sizeable redrafting of the current electorate boundaries, with predictably unusual results.

To be fair to the commission, it does have a thankless task.

The Electoral Act 1993 says there must be 16 and 16 only electorates in the South Island, and trying to carve up 150,000sqkm of landscape into portions with roughly 60,000 people apiece is not the easiest tangram puzzle to solve.

The inhabitants of the planet’s 12th largest island do not live in conveniently numerically comparable locations, hence the South Island seats are geographically peculiar, to say the least.

The most obvious example of this on 2020’s provisional electoral map is Dunedin North, where the commission has obviously had an almighty struggle to achieve its proportional goals.

Hence, the draft Dunedin North boundary marches along Andersons Bay Rd then veers off down Portobello Rd, before meandering along Bayfield Park, heading up Every St, then making a plunge down to Tomahawk Lagoon.

Broadly, this means the Otago Peninsula and 8000 people who once called Dunedin South home are poised to become resident in Dunedin North.

"I’m just short of the border so I’m not affected personally, but I find that separation a bit counterintuitive, it’s not as if there is a natural affinity.

"I’m not at all sure that the community has any idea what is proposed."

The deadline for appeals against the draft boundaries is December 20, and Mr Benson Pope said he was quite likely to raise his objections to what he calls a "frankly odd" decision.

"The peninsula has historically never strayed from the southern electorate, and I’m not sure that it should."

Also scratching his head over the commission’s initial determination is Clutha District Mayor Bryan Cadogan, who is also not best pleased at the planned new dimensions of Dunedin South.

One of the requirements of the boundary setting process is that the commission must consider communities of interest, and the community that Mr Cadogan is most interested in — the long-standing territorial authority that is Clutha District — is about to be dismembered.

As the name implies, Clutha has been a part of the Clutha-Southland electorate.

But as things stand it is about to be sliced, diced, and distributed between Invercargill and Dunedin South, with a portion remaining in Clutha-Southland.

Not at all tongue in cheek, after seeing the new boundaries Mr Cadogan suggested Dunedin South should be renamed Greater Clutha.

"For us to be split three ways is unnerving and unexpected and I'm still thinking through what the implications might be."

Some may wonder why any of this matters a jot, but for communities like Clutha there are major implications.

Quite apart from a possible sense of loss of local identity, questions may well arise as to which of three potential local MPs the electorate should turn to to lobby on regional issues: if all are willing to do so all well and good, but if all choose to defer to someone else Clutha faces the risk of having no-one speak on its behalf at all.

That would surely be a perverse outcome for a representation commission to achieve.

This means Dunedin South is now a great deal more rural a seat than it once was.

An analysis of polling booth returns from the 2017 election suggests the electorate should remain in the Labour fold, despite National hopes that the borders will change enough to make it marginal.

That said, the party vote in Dunedin South has been won by National in two of the last three elections.

Expect National to hit the ground running in the seat come 2020 and then assess whether the seat is actually in play or not.

Wellington Central MP Grant Robertson was on stage at Labour’s annual conference in Whanganui on Saturday, but his heart was back home in South Dunedin.

"Closer to home for me — where I grew up in fact — is the Hillside Workshops," the Finance Minister told delegates.

"I stood in front of you as Opposition Spokesperson and said we would get Hillside thriving again, and the coalition Government is delivering that with a $20million investment.

"I want to pay a tribute here to Clare Curran as MP for Dunedin South who never, ever gave up on Hillside or the workers who were there, and to the RMTU as well."

Speaking of Ms Curran, her ongoing stoush with Nelson MP Nick Smith resumed this week, as the Government adopted urgency to progress the Electoral Amendment Bill (No 2), among other pressing pieces of legislation.

Fresh from accusing Dr Smith of acting like a pork chop last week, this week Ms Curran repeatedly put the spotlight on his participation in the justice select committee’s deliberations on the inquiry into the 2017 election.

"Nick Smith needs to take a look in the mirror on that, instead of getting up in the House and spouting forward his usual speech about constitutional outrages," Ms Curran said, before moving on to pick a scrap with Hamilton West MP Tim Macindoe for good measure.