By Wyatt Ryder
0 Comments
Teaching men to address their emotions is the only way we can address domestic violence in New Zealand.

White Ribbon, an anti-domestic violence organisation, teamed up with the Tribal Nations Motorcycle Club to mark the day by giving out temporary tattoos, ribbons and balloons in the Octagon.

Mr Addison said New Zealand had one of the worst domestic violence death rates in the world and something had to be done.

The key to that was respectfully addressing the issues and teaching men alternatives to using violence as an outlet.

There was no point blaming and insulting men and instead the approach focused on compassionately working with them. 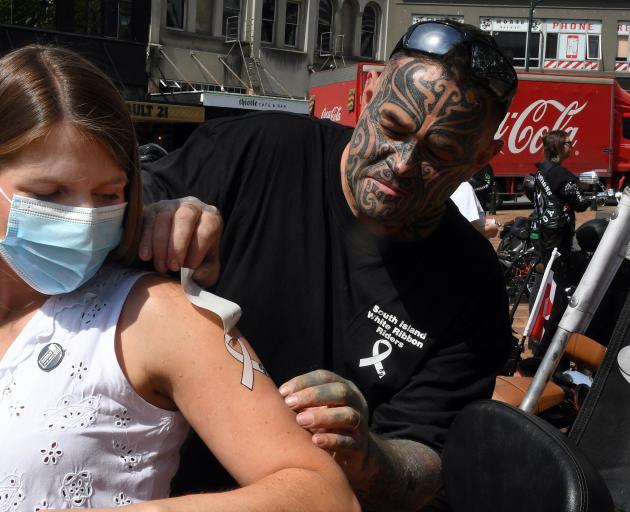 Applying a temporary tattoo to Amy Houseman is White Ribbon lower South Island ambassador Jamie Addison in the Octagon in Dunedin yesterday. PHOTO: STEPHEN JAQUIERY
A lot of men saw speaking about their emotions as "unmanly", but that had to be put aside, he said.

"Unless we teach men, this is not going to stop."

By equipping men with the tools to handle their emotions the issue could be addressed at the core.

The event was also a great chance to speak to women about what they could do if they were in a domestic violence situation.

Although there were cases of women abusing their family, an overwhelming amount of domestic violence was perpetrated by men, Mr Addison said.

He had grown up surrounded by violence against women and knew the realities of the situation all too well, he said.

There had been little change in domestic violence rates for 15 years, but he still believed there was hope for a better future.

That hope came with consistency, he said.

Addressing the issue one day a year would not solve the issue and White Ribbon would keep travelling across the country and spreading the word.

He urged men struggling with their emotions to reach out to a friend or to White Ribbon if they needed help.