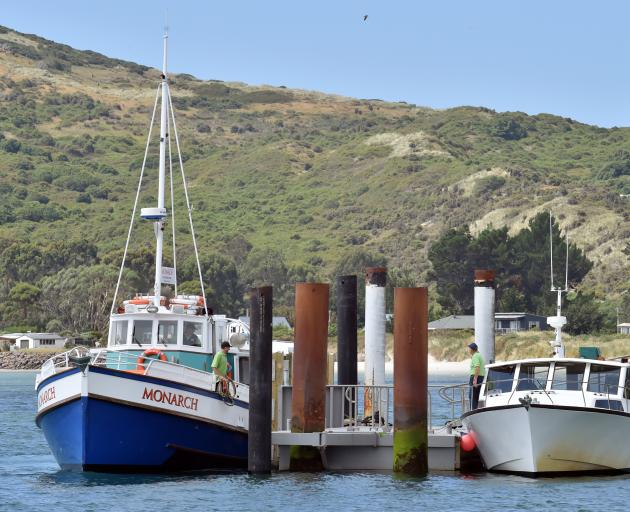 Monarch and Vivienne J float moored to the Wellers Rock pontoon, where the two black piles were driven in yesterday. Photo: Gerard O'Brien
An investigation is under way after conservationists raised concerns about unconsented work at Wellers Rock Jetty, in Otago Harbour, yesterday.

The Otago Regional Council yesterday confirmed it had started investigating, but further details were scarce.

Hector’s dolphin advocate Genevieve Robinson, of Christchurch, contacted the Otago Daily Times yesterday afternoon to provide pictures and a video of the work, piles being driven at the pontoon below the jetty, as it was under way at the Dunedin City Council-owned jetty yesterday.

She said she contacted the Otago Regional Council after being supplied the video and was told by ORC staff it was a ‘‘non-permitted activity’’.

‘‘If people are doing this without a consent, we should be very worried,’’ Ms Robinson said.

‘‘I can’t stand this stuff, when they think they can get away with it because they’re a council — it really irritates me.’’

An ORC spokesman said the council was checking with the DCC what the work involved and whether it was consented.

‘‘Once initial investigations are completed, we will be in a position to comment further,’’ the spokesman said.

The DCC did not respond to ODT questions yesterday.

DCC documents show the jetty is owned by the city council and is located about 500m north of Wellers Rock.

Monarch Wildlife Cruises and Tours owner Neil Harraway, whose company uses the jetty, said the project was not a Monarch project and referred comment to Port Otago and the DCC.

University of Otago zoology professor Liz Slooten said if there had been a public notification process she ‘‘probably’’ would have opposed the application over the percussive type of work when there were options which achieved the same result, that did not create the same disturbance to the marine environment.

‘‘The noise above water is pretty horrendous, but the noise below water is much worse, because sound travels so well in water,’’ she said.

DCC documents state that Wellers Rock, the ‘‘actual rock area’’ is a historic reserve managed by the Department of Conservation.

Last week, the ODT reported up to $10,000 being spent on a project to stop the degradation of the historic site.

However, that project was focused on car parking issues at the site.

Does repair and maintenance require a resource consent?

You can't fart without having to get a resource consent these days.

Greenies on the rampage? Don't they have anything better to do? Why should a small minority dictate their views on others?

Which 'minority' are you talking about OtagoIdeas? The ones breaking the law by doing construction work in a conservation area? Or the ones saying they are in the wrong? You don't need to look far to see what unfettered ability to do as you please can lead to. Pollution, extinctions, harm to human life... the minority with power don't always look out for the weak. And, like it or not, a healthy environment is needed for a healthy life.